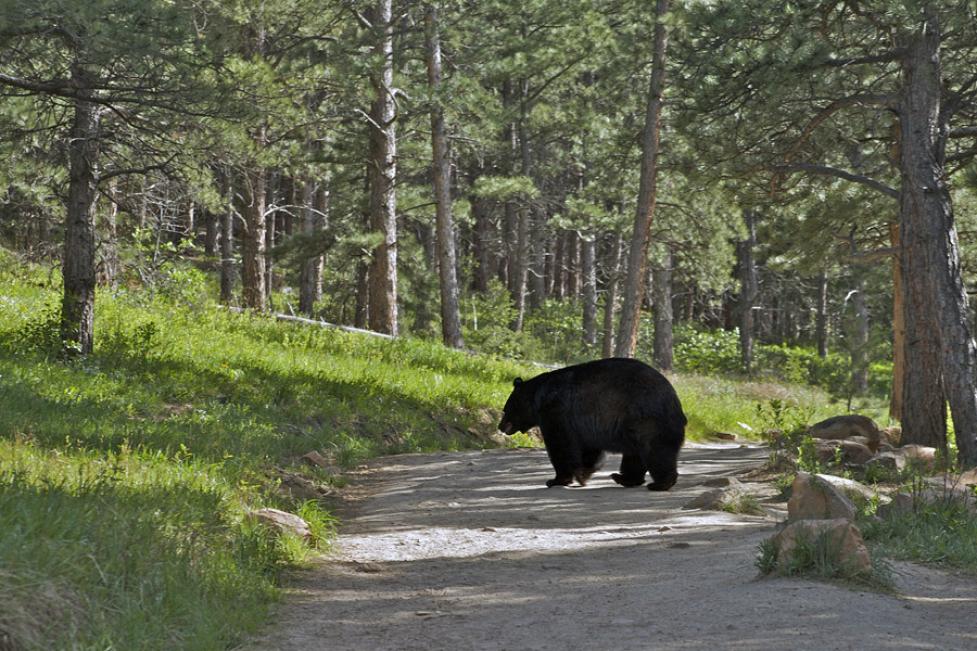 A black bear walking across a trail near Chautauqua.

Walking and Hiking in Bear Country

Your neighborhood is bear country, too!

If You Meet a Bear, Stay Calm

Once a bear finds food, it will come back for more.

If You See a Bear in Your Backyard:

Colorado has been home to bears since their earliest ancestors crossed the Bering Land Bridge. These large, powerful animals play an important role in the ecosystem. Wildlife scientists estimate that Colorado could hold about 12,000 black bears and zero grizzly bears. Grizzly bears have been extinct in Colorado since about 1970. All bears in the Boulder area are American black bears, even though some may not have black fur. It's not unusual for black bears to possess brown, cinnamon-colored or even blond fur! Today, increasing numbers of people routinely live and play in bear country.

For many people, seeing a bear is rare and the highlight of an outdoor experience. Learning about bears and being aware of their habits will help you fully appreciate these unique animals and the habitat in which they live. Where bears and people share habitat, following these simple precautions will reduce your risk of conflicts. Learn as much as you can about bears and their habitat. When you are in bear country, know what areas a bear may use during different seasons. Watch for bear sign (tracks and droppings). Be aware of your surroundings and try to determine if bears may be present.

Mountain lions have been a part of the ecosystem of the Front Range of Colorado for thousands of years. They are large predators feeding mainly upon deer. Lions have proven to be adaptable and can live on lands adjacent to cities as long as they have ample prey and places to rest and hunt. Although lions do live on Open Space, they are primarily nocturnal and secretive. The chances of seeing a lion are slight, and even less likely is an attack by a mountain lion. Even though most people never see a lion, it is important to understand this magnificent wild cat that shares our natural areas. 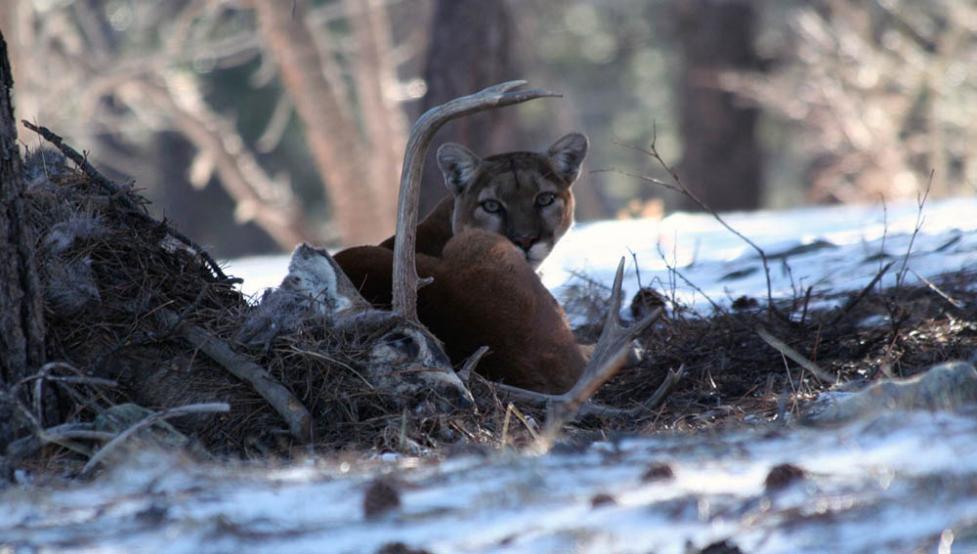 Mountain Lion sitting by its cache

What to Do If You Meet a Lion

How to Protect Your Back Yard from Mountain Lions

Share these simple precautions with your neighbors. Prevention is far better than a possible lion confrontation.

Mountain lions have been a part of the Front Range ecosystem for thousands of years. They are both territorial and solitary. When a mountain lion establishes its territory, it is often the only lion in that area. If a mountain lion leaves its territory, another mountain lion takes it over. Because of this, removing or relocating lions observed in the city does not reduce potential conflict. Rather, the focus is on building education and awareness about lions in the community. Relocation and removal of lions from the city is reserved for individual animals that pose a direct threat to humans through abnormal or aggressive behavior. 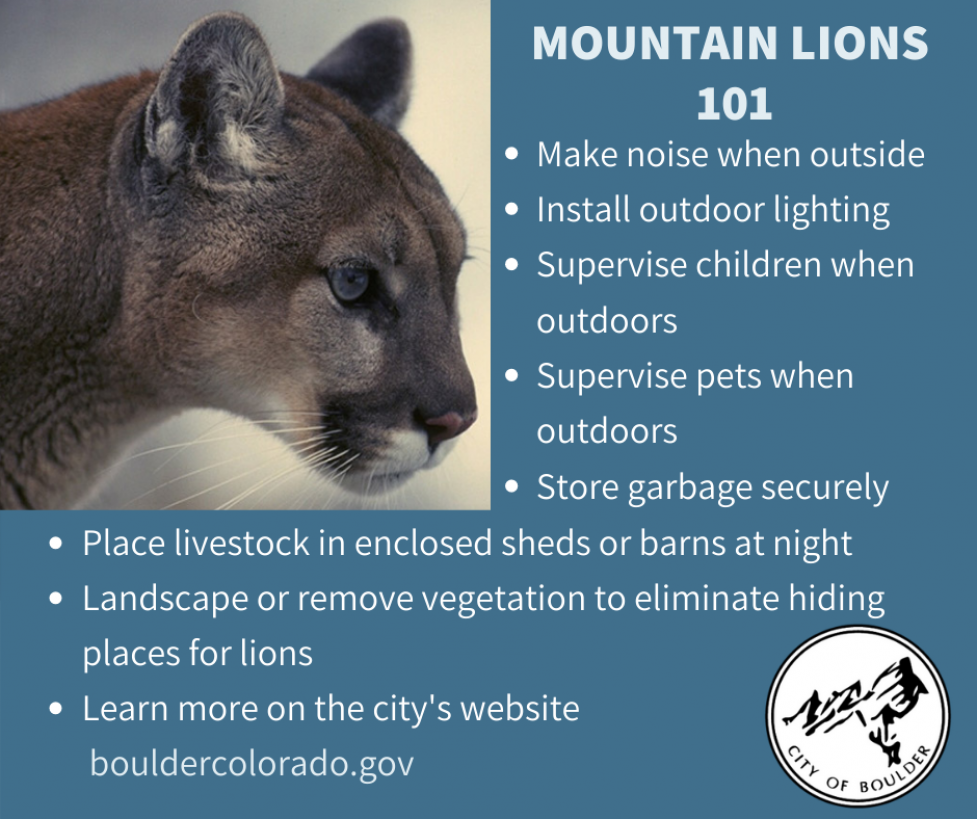 The mountain lion is the only wide-ranging, long-tailed wild cat in North America. Most of the United States knows this cat as puma, mountain lion, or cougar (cougar is a mix of French and a Tupi Indian word). The mountain lion goes by many other names: east of the Mississippi — panther, painter, and catamount (short for ‘cat of the mountains'). To scientists, it is known as Puma concolor, or "cat all of one color." The mountain lion's coloring can range from a tawny brown to a reddish brown, depending on where the lion lives.

The mountain lion's face is very "housecat-like," and it even purrs. The mountain lion uses its long, thick tail for balance (during a prey chase, or climbing trees). A mountain lion has been documented leaping 18 feet vertically and 45 feet horizontally. The lion has retractable claws used for killing prey and climbing trees. Mountain lions can live up 10 to 12 years in the wild. Adult males can weigh 160 pounds, with females weighing an average of 100 pounds. From nose to tip of tail the lion measures up to eight feet. Lions are found throughout the western United States, Rocky Mountains, parts of Canada, Texas and (remnant populations) in Florida. Population numbers have been reduced drastically due to encroachment and predator control programs.

In Boulder County, mountain lions can be found in a variety of habitats, such as mixed deciduous/coniferous forests, riparian areas and rocky foothills country. A male mountain lion's territory may cover 100 square miles; however, in Boulder County this is probably not the case. Less available habitat and concentrated food sources (mule deer) may lessen territory size. Inside one male's territory, there may be two or three female lions sharing the area. The ranges of male lions never overlap. Mountain lions use "scrapes" (small piles of leaves, pine needles, and other debris) that are soaked in urine to establish boundaries of territory.

Mountain lions are solitary and seldom come together. When they do, it is usually to mate. Females mate every two years, with breeding taking place during any season. The male plays no part in rearing of the young. Gestation is about three months, with one to six (usually two or three) kittens in the litter. Kittens have spots and are blind at birth. They can begin to play when they are 10 days old and will visit the mother's kill at six weeks. After two months, the family leaves the den and at six months the kittens lose their spots. The young can remain with the mother until 18 months of age, at which time they must find their own territory.

A mountain lion's diet consists mainly of deer and elk. They can also eat mice, rabbits, squirrels, porcupines, raccoons, coyotes and grasshoppers. A mountain lion will generally not eat carrion. Domestic livestock may be hunted and consumed. Contrary to popular myth, lions don't sit in trees and jump down on people or prey. The cat will stalk its prey on the ground, or use a high spot to look for potential prey. A mountain lion will usually catch only one out of three deer that it chases. Any uneaten parts of a carcass may be covered with pine needles, leaves and other debris for later feeding. This is called a cache. Cougars eat about one deer every one to two weeks. Cougars eat weak or diseased animals and keep deer populations scattered, preventing overgrazing.

Adult mountain lions have no enemies other than humans. Generally, all the large carnivores (bears, wolves, lions) avoid confrontations with each other in the wild. Predator Control: As recently as 1960, hunters were paid a $50 bounty on the hide of a mountain lion. Now, they are considered a beautiful, powerful predator that plays an important role in the ecosystem. There is no exact count of mountain lions in Boulder County, so reported sightings are an important measure of the population.