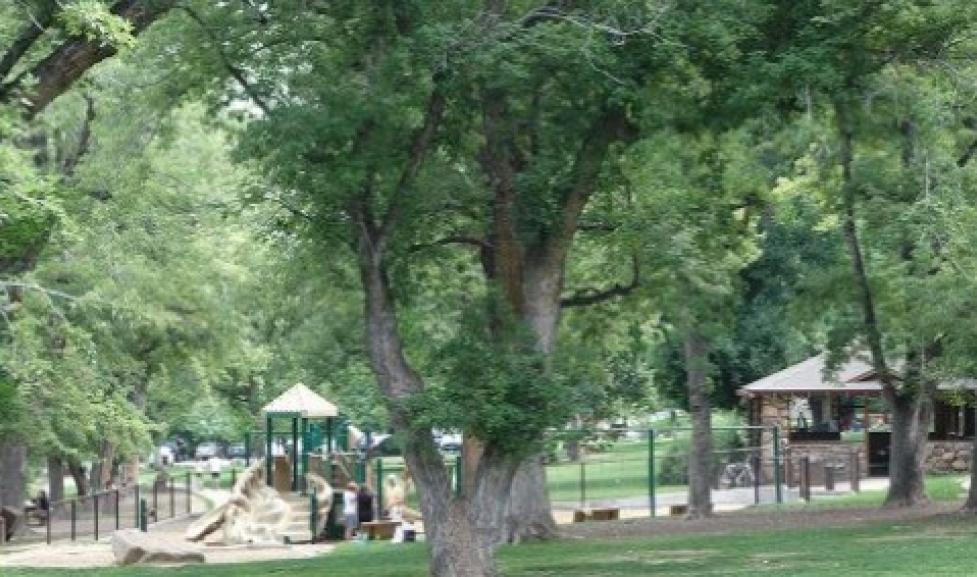 Due to the continued and unpredictable drought conditions - Prohibited: Charcoal Grills, gas/camp stoves and private grills of any kind in the city public park lands.

Please Pack it in/Pack it out. Pick up litter and help keep our parks beautiful for all users.

Groups must be limited to 50 people or fewer and all participants must follow local and state public health guidance.
Glass containers, alcohol and private grills are prohibited.
Spread awareness of Leave No Trace™ principles and encourages park users to reduce, reuse and recycle.

Eben G. Fine Park contains portions of the Boulder Creek and Boulder Creek Path with a variety of recreational amenities, including a playground, open turf, historic stone picnic shelter and access to water.
In 2022 the stone picnic shelter will not be available for reservations due to the continued rising numbers of COVID/Omicron and the general popularity of this area already drawing number of general park visitors over our capacity limits.
A multi-use pedestrian bridge over Boulder Creek connects the park to The Peoples' Crossing trailhead and Red Rocks with Open Space and Mountain Parks directly to the north.

Children have a variety of opportunities for nature play at Eben G. Fine Park. Boulder Creek is easily accessible for play, exploration, and observation. In addition, educational signs are posted along the Boulder Creek Path describing how to observe wildlife without disturbing their habitat and the importance of this riparian corridor. The playground also contains climbing structures and sand for free play.

Eben Givens Fine was born in Missouri in 1865. He came to Boulder in 1886 to take a job in George Fonda's drug store. In 1907 he became part owner of Temple Drug Company. Fine retired from his profession as a pharmacist in 1927, and was elected secretary of the Boulder Chamber of Commerce, a position he held for many years. He was an active member of the Chamber of Commerce, serving twice as its secretary.

Fine helped raise subscriptions to build the Boulderado Hotel, and helped organize the Semi-Centennial Celebration in 1909. He was instrumental in bringing a group of Ute Indians to Boulder for the celebration. Fine lectured extensively on Boulder, making annual tours around the country to promote Boulder through slide lectures. He became the city’s biggest promoter, earning him the nickname, “Mr. Boulder.” He wrote a book of reminiscences shortly before his death called "Remembered Yesterdays." Eben G. Fine died on April 30, 1957 at the age of 91.