Turning to the Past for Answers to the Present: A Look at the 1918 Spanish Flu 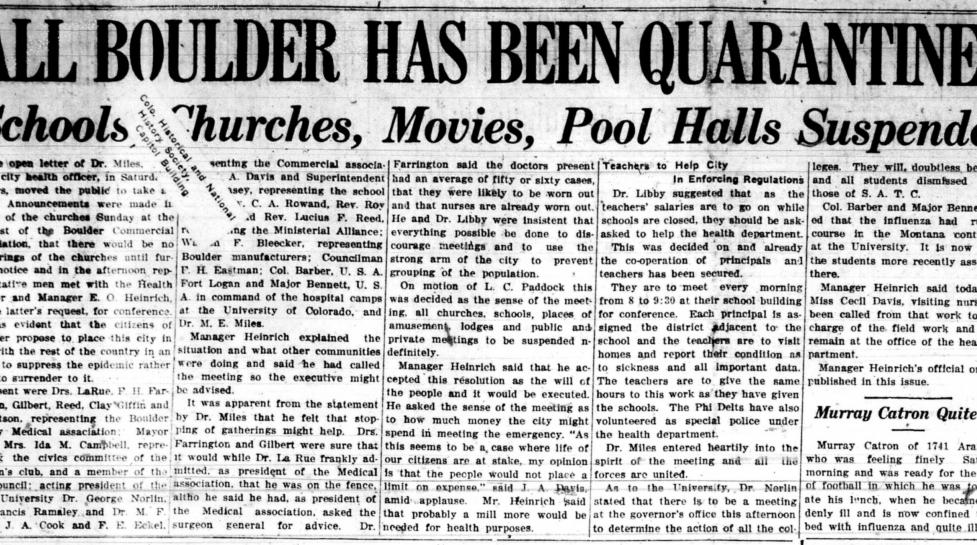 Carnegie Library for Local History explores its archives and uncovers a treasure trove of stories, headlines, and a personal diary about the Spanish Influenza the wreaked havoc across the United States in 1918. 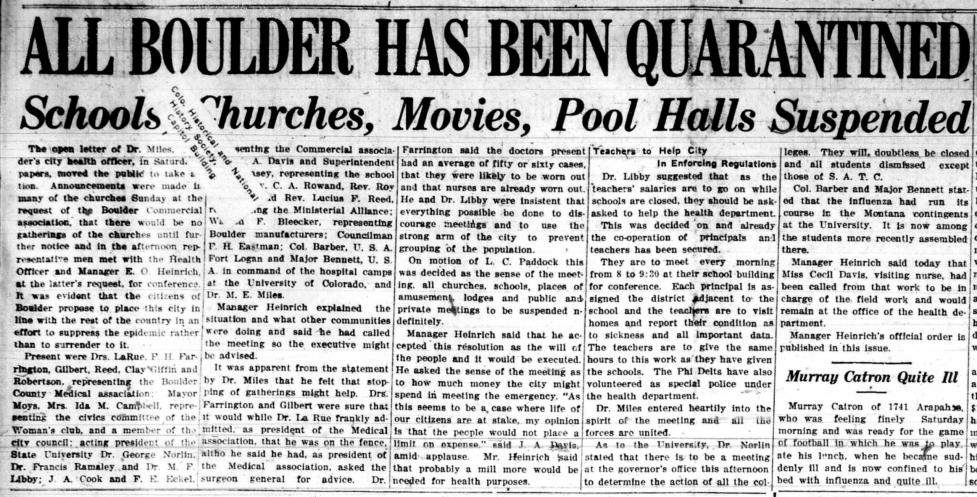 COVID-19 numbers continue to spike again in Colorado and with the holidays around the corner, many are turning to boosters to protect themselves from the virus. It is also no surprise that many have looked at the past to see how we can get through this present pandemic by learning from when the 1918 Spanish Influenza wreaked havoc across the nation. At Carnegie Library research questions began to flood the librarian inbox this past summer. At first, it appeared there was not much in the archive—a handful of newspaper clippings, many of them written in the past 10 or 20 years looking back. Soon after a question came in asking about an obituary for a woman who died in the fall of 1918. Archivist Nicole Docimo began looking at the Boulder Daily Camera on microfilm and found the requested obituary, which confirmed the woman had died from the Spanish Flu. 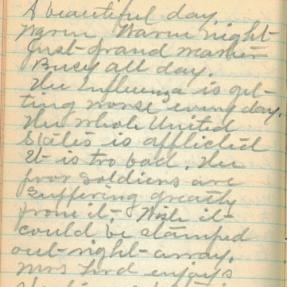 This Oct. 5 entry reads “A beautiful day, Warm warm night. Just grand weather. Busy all day. The Influenza is getting worse every day. The whole United States is afflicted/ it is too bad. The [?] soldiers are suffering greatly from it. Wish it could be stamped out right away, Mrs. Ford enjoys sleeping upstairs.” Museum of Boulder collection (local call # 272-4-5)

As the fall wore on into winter, case numbers fell and rose again. Recommendations were made for ventilating houses and staying outside. 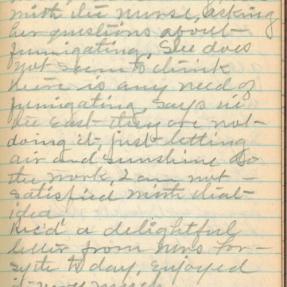 It appears from the diary that Mrs. Ford (who was “sleeping upstairs” in the prior diary entry and may have been a boarder in the Wilder house) had contracted Spanish Flu. Harriet Wilder’s Oct. 28 diary entry reads, “Today has been nice, quite cool. Had quite a long talk with the nurse asking her questions about fumigation. She does not seem to think there is any need of fumigating. Says in the East they are not doing it. Just letting air and sunshine do the work. I am not satisfied with that idea . . .” Museum of Boulder collection (local call # 272-4-5)

No doubt there are more stories from 1918 waiting to be uncovered in the archive. One of the great gifts of looking back in time, especially at difficult moments, is realizing that others have been through the same thing.

Harriet Wilder and her brother Eugene survived the Spanish Flu. Local schools reopened and university students returned to class, and the Spanish Flu gradually tapered off in 1919. According to a 2018 Boulder Daily Camera article by Carol Taylor, 7,783 Coloradoans died in a 10-month period from the Spanish Flu. Looking at multiple sources, it seems unclear how many people died in Boulder, but likely somewhere between 80-120 people. (For perspective, the 1920 census lists 939,629 residents of Colorado and 11,006 residents of the city of Boulder).

By Nicole Docimo, Archivist at the Carnegie Library for Local History, edited by Annie Elliott