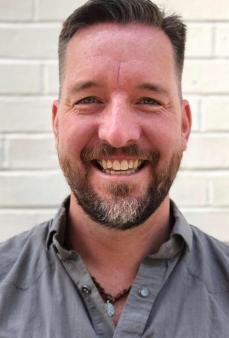 While technically a native of Colorado, Cris Jones is, at heart, an army brat with family roots in Utah. He spent his childhood moving around the country experiencing life in a variety of communities and cultures before his parents settled permanently in Colorado when he was 13. After graduating high school in Pueblo in 1999, he arrived in Boulder to attend CU where he earned a bachelor’s degree in environmental design with an emphasis in planning. Concurrent with his studies, he was both a scholar and class advisor for the Presidents Leadership Class.

Cris has worked in local government in a variety of roles for 22 years with more than 15 of them with the City of Boulder. He began his career with the city during his junior year at CU when he was hired as a transportation planning intern and served as the city’s Walk and Bike Week coordinator. When he graduated from CU, he was hired full-time as a planning associate with the GO Boulder (transportation planning) division focusing on the implementation of a variety of multimodal projects until he departed as a transportation planner II in 2014 to take on a leadership role with Salt Lake City’s Transportation Division, first as the manager of transportation planning and programs, and then as acting deputy director. While in Salt Lake, he helped lead the implementation of several “complete streets” projects as well as the adoption of the city’s first ever Transit Master Plan. In 2018, he returned to Boulder to take on a role as deputy director of the Community Vitality Department where he now serves as interim director. The Community Vitality team has long been responsible for supporting great access and vitality for Boulder’s three commercial general improvement districts (downtown Boulder, University Hill, and Boulder Junction), parking and access services, and economic vitality. Under his leadership, the city’s Office of Arts + Culture and special events functions have been added to the department’s mix of services. Cris is looking forward to further leveraging his extensive local government and transportation experience to empower inspired public and private investments that will continue to cultivate Boulder into an even more sustainable and resilient city.