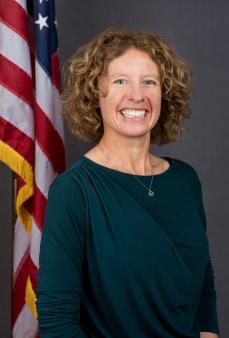 Joanna Crean is the Director of Facilities and Fleet. Joanna joined the city in 2002 and previously held roles as Deputy Director of Public Works for Support Services, Interim Transportation Maintenance Manager, Senior Project Manager, Flood Recovery Coordinator for Infrastructure and Operations, Project Manager and Project Coordinator for Public Works. Joanna started her career as an environmental consultant for the federal government but soon learned that her passion was public service at the local level. Joanna holds a bachelor’s degree in Political Science from the University of Colorado at Boulder and a Master’s in Public Administration from the School of Public & Environmental Affairs (SPEA) at Indiana University Bloomington. Joanna is a graduate of Weldon Cooper Center for Public Service’s LEAD program and is in the process of completing the Leadership-International City Manager’s Association program.