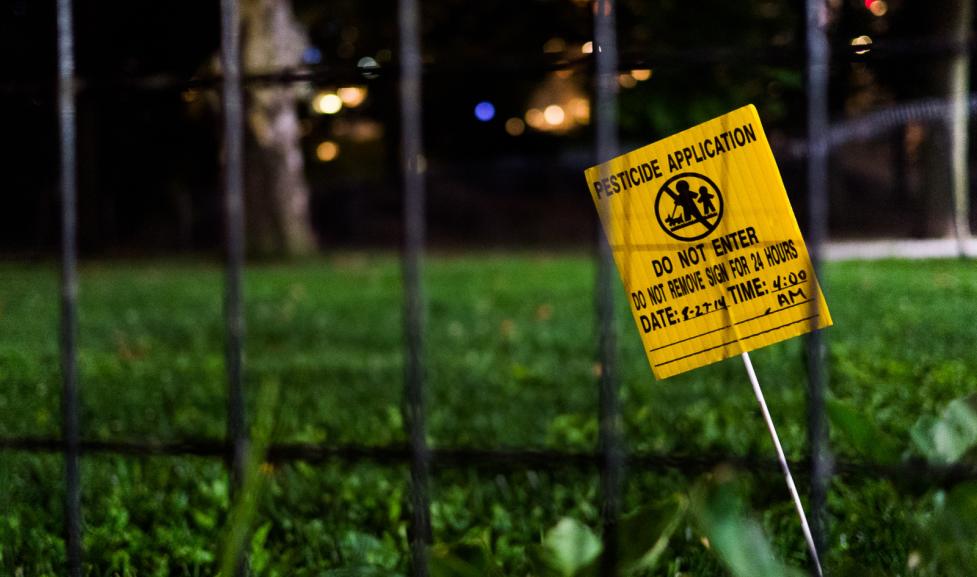 Pesticide is a general term that includes insecticides, herbicides, fungicides, rodenticides or any substance or mixture of substances that can kill, repel, or interfere with a target organism. Long-time city policy aims to reduce and eliminate the use of pesticides. Why?

Pesticides are chemicals that are designed to harm organisms and are intentionally released into the environment for that purpose. In most pesticide applications, the majority of the pesticide never reaches the target pest, but instead travels into the air, water and soil where non-target organisms are exposed. It’s commonly assumed that a pesticide will only kill or harm the target pest, but pesticides almost always interfere with the physiology and/or behavior of other living organisms. When non-target organisms share a similar physiological pathway with a pest, the non-target can be directly hurt or killed when exposed to the pesticide - e.g. most insecticides have broad-spectrum action since animals, including humans, share the same type of nerve cells and neurotransmitters with insects. Or sometimes a pesticide can interfere with a physiological pathway that is completely different than the mode of action for the intended pest. Fungicides and herbicides may have one mode of action for a fungus or weed, yet interfere with the physiology in vertebrates through completely different mechanisms than the way the pesticide might kill the pest. The herbicide atrazine is an example of a pesticide designed to kill plants that causes major reproductive impacts at extremely low concentrations to animals and is associated with multiple issues in humans including cancer and urogenital birth defects. The fungicide benomyl is toxic to humans in very low doses. These problems are often discovered after the product has been on the market for many years and it can take decades for these products to removed from the market. The U.S. allows continued use of pesticides like atrazine and benomyl despite overwhelming evidence of harm, while these products are banned in other countries.

Pesticides have been shown repeatedly to adversely impact soil, freshwater ecosystems, amphibians, insects, birds, coral reefs, coral fish, marine mammals, etc. The regulatory process is not adequate to appropriately estimate the ecological risk from pesticides or to humans, particularly children. As the EPA phased out the use of problematic pesticide groups like the organophosphates and carbamates, newer pesticide groups like the neonicotinoids and pyrethroids have increased the toxic load of agricultural lands by 50-fold. These newer products that were intended to be safer have contributed to catastrophic insect and wildlife declines.

Not only do pesticides directly harm organisms, but through both direct and indirect effects, entire ecosystems are impacted. As biodiversity continues to decline from multiple stressors, the worlds’ academies of science are calling on world leaders to take urgent action to reverse these trends.

We’re exposed to pesticides and dozens of other synthetic chemicals in daily settings. Eliminating these chemicals in our homes, schools and workplaces and transitioning our food system to regenerative agriculture will protect our health and help reverse declining biodiversity.

Pesticide use on city property

Turf grass on city properties, including athletic fields, has been managed without pesticides (herbicides, fungicides and insecticides) since 2002. Landscaped areas of parks and medians are also pesticide-free.

Almost all pesticides are banned on city property, including the neonicotinoids and glyphosate (active ingredient of Roundup). Before a pesticide can be considered for use, it must be assessed with a review of the regulatory data and peer-reviewed literature. The results are run through hazard criteria and categorized. Any pesticide use has to be justified. Before city staff can consider applying a pesticide on the city’s Approved Pesticide List, they must use the city’s Integrated Pest Management decision process and show that non-chemical methods are not feasible and that the undesired organism has exceeded a threshold.

This dashboard can take some time to load. Please be patient.