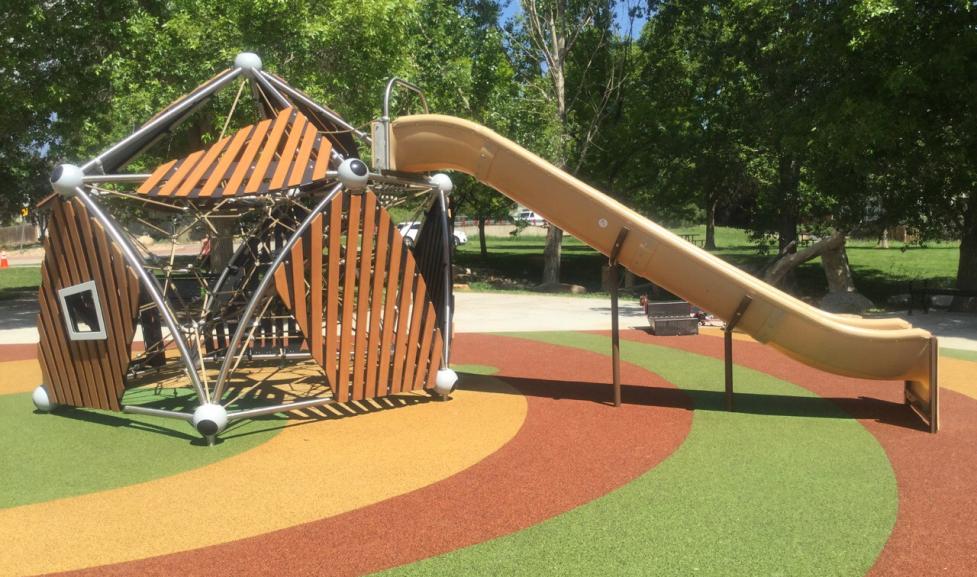 A secluded neighborhood park that provides visitors with a large area of open turf, a playground, and a picnic area enclosed by natural buffers and the bike path.

An attorney’s letter, dated September 1989, notified the City of Boulder that a recently deceased resident named Jean Louise Christensen bequeathed 59 percent of her estate to the city for the creation of a park.

The surprising donation was also a substantial one of over $400,000 and coincided with the development of a three-acre park located within the newly developed Noble Park/Kings Ridge subdivision, north of Valmont Road between 47th Street and Airport Roads. Today, Christensen Park, located at 3100 Kings Ridge Boulevard, is nearing 25 years old and recently received an extensive renovation.

Tucked away, a block off Valmont Road, the refreshed park sports a fun nature play area with a seasonally functioning water pump, log bridge and natural wood “kid cave,” in addition to the latest playground features for 3-12-year-olds and new irrigation system.

So who was Ms. Christensen? What little we know about Jean comes largely from her August 1989 obituary and a few notes from interviews with her cousin and friends.

Jean was born in Manville, Wyoming on Jan. 17, 1915, where her father was a medical doctor and the town’s first mayor. Manville started as a small supply and shipping hub for several large livestock ranches when the railroad arrived in 1886. Its population boomed to more than 1,000 when oil was discovered in the 1920s. Less than 100 residents live in Jean’s birthplace today.

During WWII, Jean worked in her father’s Longview, Wash. medical office and served as a Navy WAVES (Women Accepted for Volunteer Emergency Services). Before moving to Boulder in the 1950s, Jean attended Washington State College and earned a bachelor’s degree from Linderwood College in Missouri. A private person, Jean loved wildlife and gardening. She never married, living alone at 502 Highland Avenue for many years. She was a member of First Presbyterian Church, the Philharmonic Guild, Daughters of the American Revolution (D.A.R.), Business Professional Women’s Club and Boulder Republican Women’s Club.

Jean passed away at age 74 and was buried with her mother (Mary L. Cook-Christensen) and father (John) at the Crown Hill Cemetery in Lakewood, Colo. Donations from her estate also helped the American Cancer Society and American Heart Fund. A plaque at the park, dedicated in August 1993 reads: “For the enjoyment and pleasure of the citizens of Boulder, in memory of her parents, Dr. John Christensen and Mrs. Louise Christensen.”

Today, the park’s beautiful canopy and the wide variety of trees are due to years of generous donations and plantings by Daughters of the American Revolution’s Arapahoe Chapter, and organization once chaired by Jean. While a park had been planned for the site before Jean’s gift, Christensen Park would not be the same without her generous contribution.