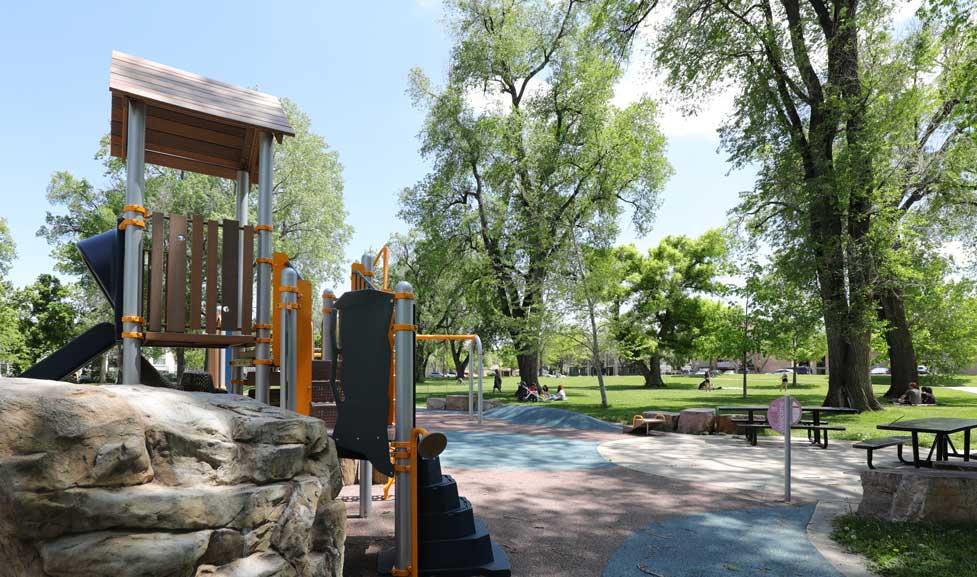 The City of Boulder and the Boulder Valley School District built 20 Quonset apartments (steel structures) in response to an influx of returning soldiers attending the University of Boulder under the GI Bill of Rights In 1946 following World War II, on the two empty acres of land, owned by the Boulder Valley School District, at 21st and Water streets (now Canyon Blvd).

Emma Martinez, a member of one of the earliest Hispanic families to establish themselves in Boulder; lived, studied and worked in the neighborhood and soon assumed the role of spokesperson and primary advocate for the Hispanic community in Boulder. In the 1950s, at the end of the GI rush and when CU no longer needed the Quonset village, the land was traded to the school district.

For years, Emma lobbied for the two acres of land to be converted into a park since the area was open, tree-shaded, grassy and there was already playground equipment installed for the university students’ children. With no funding or assistance from the school district, Emma organized “clean-up crews” consisting of neighborhood kids and their parents to preserve the only park and play area to which they had access. During the late 50s and 60s the Quonset huts were occupied by several nonprofit agencies and several of the huts were removed until, in the mid 60s only three remained.

Emma was named to the first board of directors for the Office of Economic Opportunity (OEO) in 1965, and focused her efforts toward getting this property dedicated as a community park. Shorty after being named to the board of directors for the OEO, Emma was hired as the program coordinator, Boulder Center Director and Assistant Boulder County Director for the OEO that now occupied two of the three remaining Quonset huts. Working in her position as liaison to the Boulder City Manager’s Office, she proposed that the property at 2035 Canyon Blvd. be dedicated as a community park. The property, by this time, had come under the ownership of the City of Boulder. Thus, Canyon Park, the dream and vision of many residents of Boulder, became a reality.

The request and decision was made by City Manager Jane Brautigam to rename Canyon Park to be called the Emma Gomez Martinez Park. Boulder City Council and the Parks and Recreation Advisory Board (PRAB) supported her decision as a unanimous vote.

Enjoy a fantastic playground with features that look like those found in nature including a tree, rocks and other plants. In addition, the park has plenty of green space for free play with ample shade and a basketball court.

This park is perfect for a picnic and a chance to get your children out into the fresh air, providing both seclusion and proximity to central Boulder! Don’t let Canyon Boulevard intimidate you - this park is worth the use of alternative modes of transportation. The park is accessible by bike path and RTD bus stops.