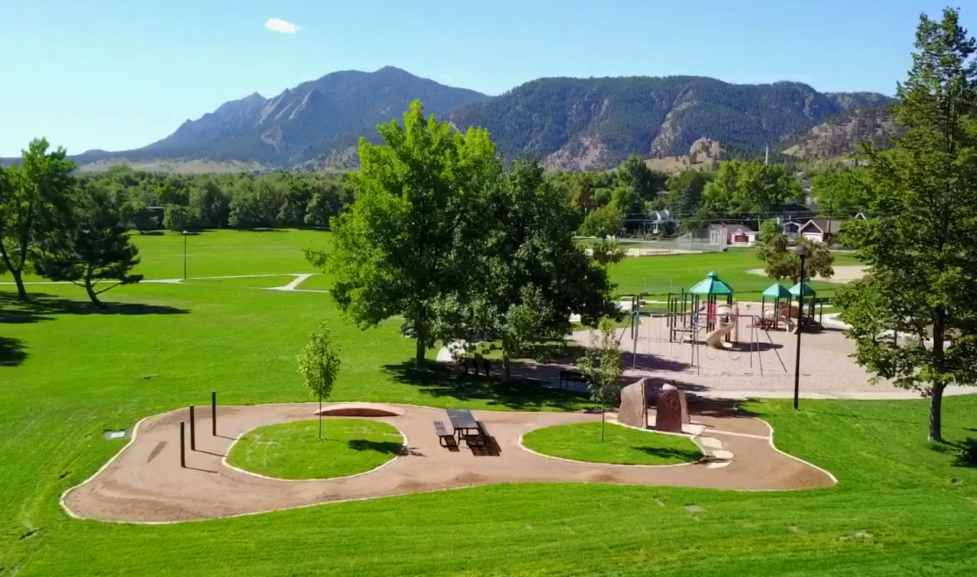 North Boulder Park offers many amenities for people of all ages and interest. This ADA compliant park gained some great enhancements in 2013 that were suggested by local neighbors. Check out the park's latest nature play features, teen-adult oriented fitness equipment.
If it snows click into your skinny skis for some laps.
Slacklining allowed south end of park

This Tot Track is made possible by a generous donation honoring the community's legacy with regard to the Red Zinger Classic/Coors International Bicycle Classic. Launched in 1975 with a finish line in North Boulder Park, these races epitomized our community's important role in establishing pro-cycling competitions nationally and worldwide. Honoring the race, racers and Boulder, the donors underwriting this amenity hope to inspire and support the next generation of cyclists.

The existing playground equipment at North Boulder Park was installed in the late 1990s and has surpassed its useful life. In 2022, the playground equipment will be replaced. Learn more by visiting the project webpage: https://bouldercolorado.gov/projects/north-boulder-park-playground-repl…

It’s common knowledge that the park’s colorful past includes hosting the starting line for the first-ever Bolder Boulder 10K race. The park has seen the likes of Olympic legend and world champion cyclists flying around the park during epic criteria stages of the Red Zinger and Coors Classic bicycle races. But do you know the story of a little girl named Emma?

Emma Walsh is the daughter of Joe Walsh, the famous guitarist and keyboardist in the rock band, The Eagles. Emma loved North Boulder Park and played there with her mom, Stefany, almost every day after they moved to Boulder from Nederland in the early 1970’s. Tragically, Emma died as the result of a car accident, just shy of her 3rd birthday. In May 1976, a memorial fountain in North Boulder Park was dedicated to her by her father.

Emma’s short life inspired Walsh’s track, “Song For Emma”, on his first “official” solo album, “So What”. While touring with singer Stevie Nicks in 1984, Walsh took Nicks to the park’s fountain. Nicks then immortalized the experience in her song, “Has Anyone Ever Written Anything For You”, on her 1985 album Rock A Little.