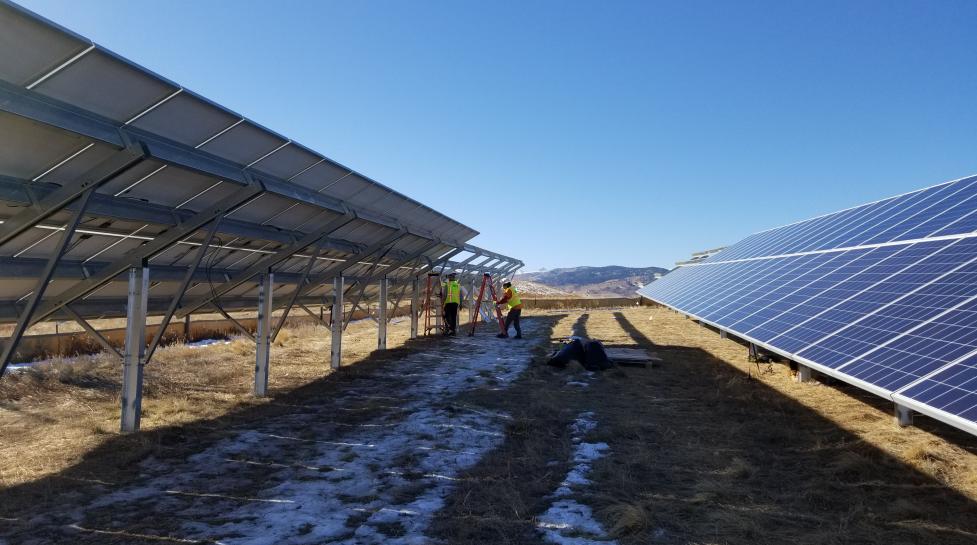 78% of respondents would vote yes on tax measure in November

The City of Boulder is releasing results from a statistically valid survey it recently conducted. The survey collected community feedback on a proposal to simplify and expand the community’s investment in climate and resilience programs. Broadly, the results indicate that the community is deeply concerned about the climate crisis and is largely supportive of the city’s tax proposal. 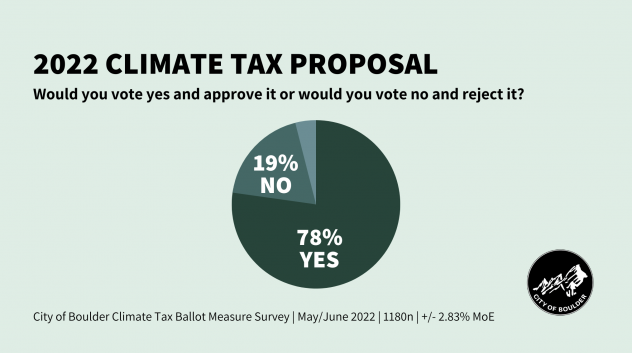 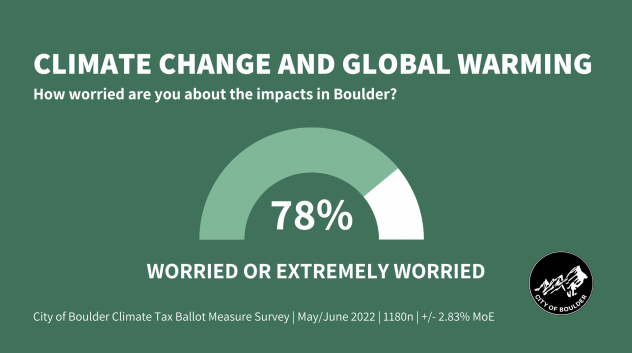 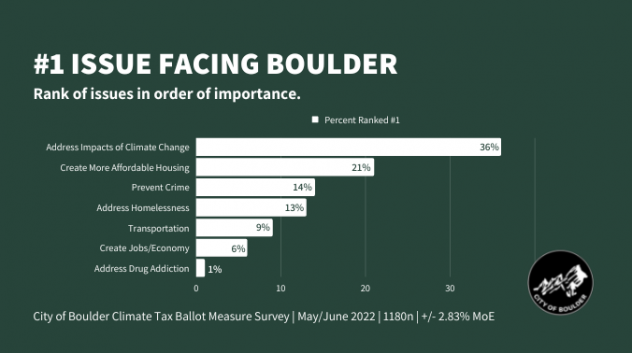 “These results are a strong showing for the city’s climate tax proposal,” said David Flaherty, CEO of polling firm Magellan Strategies. “The data indicate a very high likelihood that the proposal will pass in November, if placed on the ballot by City Council.”

“With the impacts of climate change visible all around us, it’s no surprise that our community is thinking deeply about how we prepare for and respond to the crisis,” said Interim Director of Climate Initiatives Jonathan Koehn. “The city is inspired by the community’s past investment in bold climate action, and we appreciate the continued support indicated by this poll.”

“While these results suggest ongoing community support for the city’s climate work, we acknowledge that there’s still more work to do to assure voters that the city will continue to be good stewards of public funds,” said Koehn.

There were 1,180 responses to the survey from City of Boulder residents ages 18 and older. The survey was conducted online and via telephone May 19 through June 2 by polling firm Magellan Strategies. The poll has a margin of error of +/-2.83%.

Read a summary of the results.

Each year, Boulder taxpayers contribute about $4 million to climate and sustainability programs. Early next year, a portion of this funding is set to expire, creating a gap in funding. To close this gap, the city is proposing a new climate tax that would combine the Climate Action Plan Tax with the Utility Occupation Tax. The new climate tax, as proposed, would raise about $5 million per year to fund city-level climate and resilience efforts.

The proposed Climate Tax would allow the city to focus on funding projects that address inequities caused by climate change, such as providing low-to-no-cost solar for households struggling with high energy costs.

As proposed, the annual tax rates would decrease for residents and increase for commercial and industrial businesses:

If approved by voters, revenues from the tax would support ongoing and new climate and resilience projects, including large-scale renewable energy systems, building electrification, energy storage technologies, and the restoration of forests, landscapes and soils to capture carbon and increase resilience to climate extremes.

Learn about the climate tax proposal.

The survey is not the only way the city plans to collect feedback on the ballot measure and climate projects. A separate survey for local businesses will be available later this month. The city will also conduct several focus groups designed to gather input from community groups, target communities and businesses throughout the summer.

Register for the City's Climate Conversations

Community members can tune into the city’s virtual Climate Conversations series to learn how the city is working to redesign systems at the root of climate change.

Register for each session online.