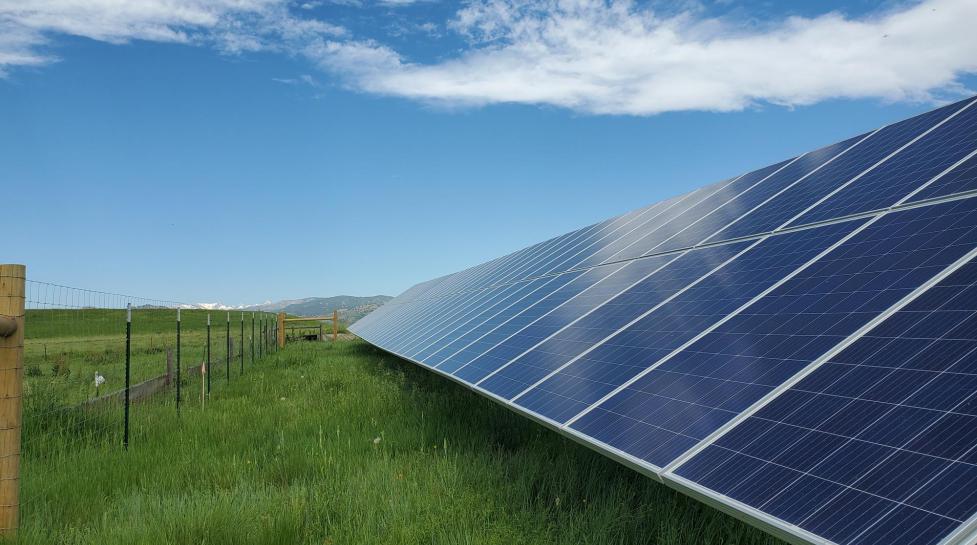 A new solar garden near the Boulder Reservoir is bringing local renewable energy to Ponderosa, a manufactured housing community in the city. Part of the city’s efforts to make solar accessible to all, the Ponderosa Solar Garden Pilot Program brings clean energy and savings to customers traditionally left out of the solar market.

In Boulder, many community members are energy burdened and face unsustainably high energy costs. The challenge is most acute for the more than 100 Boulder households that spend at least 14% of their incomes on their energy needs.

The Ponderosa Solar Garden is the first city-owned garden in the country dedicated to low-income participants and is a part of the city’s strategy to eliminate energy burden by 2035. The city purchased the manufactured home community in 2017 to create long-term stability for the residents, and recently replaced the old sewer, water and electric infrastructure and added adequate fire hydrants, paved streets and sidewalks and new stormwater management. Lower energy bills are an important way to stabilize these households.

“Access to affordable cooling is a climate justice issue.”

Solar, in addition to home energy efficiency improvements, presents one of the best opportunities to reduce energy costs. However, many energy-burdened households don’t have access to solar today. In development of the city’s Manufactured Housing Strategy, some owners of manufactured homes discussed their desire for solar and the barriers they encountered when trying to pursue it. Barriers to solar include its up-front cost, housing that is poorly suited for rooftop solar, the absence of programs available to lower-income households, and, in manufactured home communities, divided ownership of the land and the home.

“Today’s market simply does not offer many solutions to make solar accessible for people living in manufactured housing communities,” said Energy Manager Carolyn Elam. “Most of these homes can’t support solar on their roofs, and private solar garden developers rarely serve the residential community, much less households with lower incomes.”

With these barriers in mind, the city has been making investments in solar gardens so that subscriptions can be provided to local residents. Ponderosa Solar Garden participants, on average, will save more than $400 on their electricity bills each year.

Reducing energy costs is especially important in the context of a warming climate. “As summer temperatures rise, energy burden becomes a critical focus for the city,” explained Elam. “Access to affordable cooling is a climate justice issue.”

The city's Energy Impact Offset Fund (EIOF) provided funding for the solar garden. The city is also making EIOF-funded investments in other local solar gardens. These investments will expand the cost-saving benefits to other income-qualified community members.