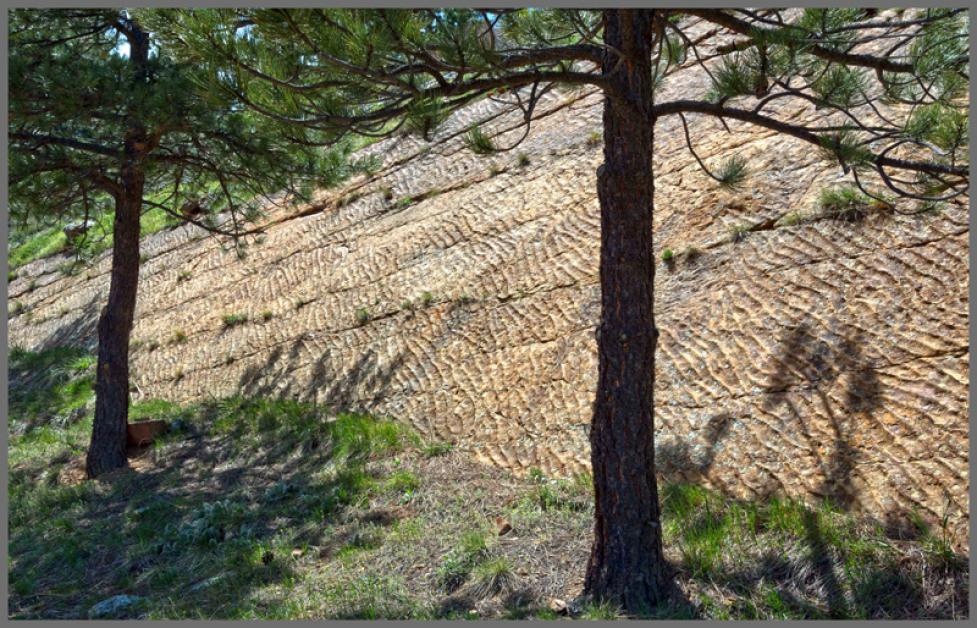 Our rocks are indeed good story tellers, and the OSMP geologic story is still in the making. Enjoy their beauty and grandeur, and please take nothing but pictures!

A visit to Open Space and Mountain Parks is not complete without a stop at the summit of Flagstaff Mountain. While you're enjoying the view, take a moment to examine the pinkish-gray rock that is exposed in the rugged cliffs and boulders. Known as the Boulder Creek granodiorite, this rock is the oldest found in the Boulder area. Geologists have dated the rock at 1.7 billion years, when it formed deep beneath the earth's surface during an episode of ancient mountain building. Initially a molten mineral "soup", this material cooled and hardened to form what is known as igneous rock. A tremendous amount of erosion has stripped away the overlying sediments to expose this ancient mountain core.

Although they were initially laid down in relatively flat, horizontal layers, rocks that comprise the Fountain Formation and those that were later deposited on top of them have been sharply tilted by another major uplift of the Rocky Mountain region that occurred approximately 65 million years ago. Have you ever observed a drawbridge as it tilted upward to allow ships to pass? As the Rocky Mountains rose, the overlying sedimentary rocks were tilted up in much the same way. In fact, the other flank of the "drawbridge" can be seen dipping to the west on the Colorado western slope. The Maroon Bells near Aspen form a portion of the Fountain Formation's western counterpart.

Observant visitors may notice remnants of old quarry sites that can be seen as you hike along the Mesa, Woods Quarry, and Royal Arch Trails. These quarries were excavated around the turn of the century to obtain Lyons sandstone, a lovely salmon-colored rock that is valued for its hardness and tendency to break off in smooth, flat slabs.

You will see the Lyons sandstone as flagstone sidewalks and patios throughout Colorado, as well as in buildings at the University of Colorado. The rock hardened from finely textured sediments that were deposited as the Ancestral Rocky Mountain Range continued to erode. Sand dunes and beach deposits formed here approximately 250 million years ago when Boulder was a hot, arid desert adjacent to a wide shallow sea to the east.

A huge, inland sea began to move into the Boulder area approximately 135 million years ago, and its sandy beaches hardened to form the Dakota sandstone. Look for undulating ripple marks "frozen" in the rock, a sure sign that Boulder was once coastal property. You can see this formation at Echo Rocks, and by the water tank just west of the National Center for Atmospheric Research (NCAR). The Dakota sandstone forms the first ridge that you encounter west of Boulder, and can be traced all the way from Colorado Springs north to the Wyoming border. Besides being a major source of groundwater, the Dakota has been extensively mined in Colorado for fire clay, and contains a third of the state's oil and gas deposits.

The sea remained in the Boulder area for millions of years, depositing nearly 9,000 additional feet of sediment on top of those already left behind by the erosion of the Ancestral Rockies. Most of Boulder sits on a thick layer of Pierre Shale, soft pale sediments deposited at bottom of a shallow Cretaceous ocean while dinosaurs stalked the land and plied the waves above. Sandy deposits at the edge of this ocean account for the whitish Fox Hills Sandstone which can be seen at White Rocks and near the town of Marshall.

Finally, the sea began to retreat, and the restless earth began to stir with the birth of the Laramide Rockies 65 million years ago. Forces deep within the earth pushed and pulled the crust, creating a ridge of mountains that were later eroded down. The second pulse of mountain building occurred nearly eight million years ago, creating the present Rocky Mountains, and uplifting the entire region of the western United States. Since the great regional uplift, the forces of erosion have been carving and shaping the area to its present topography.

1.5 million years ago, temperatures cooled and the Great Ice Age had begun to add the final touches to the rugged mountain landscape. Although Open Space and Mountain Parks were too low for any glaciation, our canyons received a torrential amount of running water from melting valley glaciers to the west. The pounding force of the water carved out the canyons that today dissect the Front Range, and scoured Boulder Valley into the soft underlying Pierre shale. Large deposits of sand and gravel were carried out onto the plains, and surfaces were eroded and flattened to form the mesa tops that you can see flanking the foothills. When the glaciers were gone, the savage rivers trickled away to become the creeks and streams we see today.