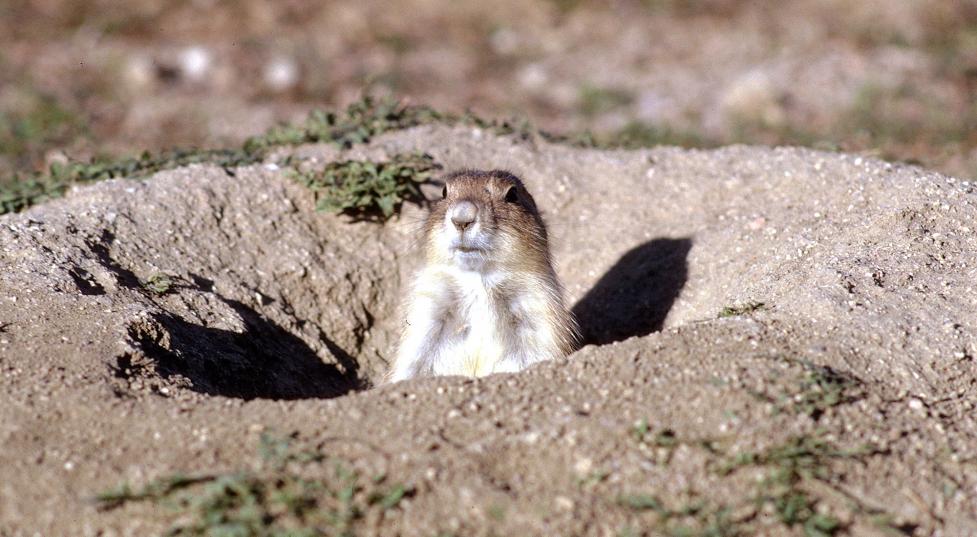 A black-tailed prairie dog peering out of its burrow mound.

Boulder Conserves Prairie Dogs on about 3,100 Acres of Open Space

The black-tailed prairie dog is a medium-sized, diurnal, colonial ground squirrel inhabiting subterranean burrows in suitable grassland habitat. They can alter the grasslands that they inhabit due to grazing and clipping of vegetation, along with extensive burrowing activities.

The black-tailed prairie dog historically inhabited much of the central plains, but through loss of habitat and direct extermination, populations have been significantly reduced. Black-tailed prairie dogs can be found across much of OSMP's grasslands and in other areas, including irrigated agricultural lands. Recent surveys have indicated that some OSMP irrigated agricultural lands have the highest levels of prairie dog occupation since the department began mapping prairie dog colonies in 1996.

Black-tailed prairie dogs are highly social animals. They live in family groups, or coteries, which typically consist of a breeding adult male, one to four breeding adult females and their offspring younger than two years of age. Prairie dogs breed only once per year in the spring. With the emergence of young, coteries can number up to 40 individuals.

The primary benefit of this colonial lifestyle is protection from predators: black-tailed prairie dogs have an elaborate communication system to warn others of the presence of danger, including both auditory and visual cues.

Black-tailed and other species of prairie dogs are especially susceptible to sylvatic plague, and periodic episodes of high levels of infection (epizootics) are seen across large parts of the species’ ranges. In Boulder County, widespread epizootics that result in extensive prairie dog mortality occur cyclically (in the past, every 7-11 years), but isolated outbreaks can occur at any time.

Plague plays a role in defining the spatial scale and arrangement of prairie dogs occupation on OSMP land and epizootic die-offs have resulted in significant reductions in populations in some areas. Due to the highly unpredictable nature of outbreaks and shifting surrounding land uses, the impact posed by plague is uncertain.

According to Boulder County Public Health, the bacteria that cause plague are transmitted to people through flea bites and direct contact with infected animals. Fleas generally do not infect other animals unless their natural host (animal) is no longer available.

Domestic cats and dogs can contract plague by catching and eating infected rodents and rabbits or by being bitten by infected fleas. They can then carry infected fleas home to their owners or, especially with cats, serve as a direct source of infection. Learn more about human health and plague from Boulder County and the Colorado Department of Public Health & Environment.