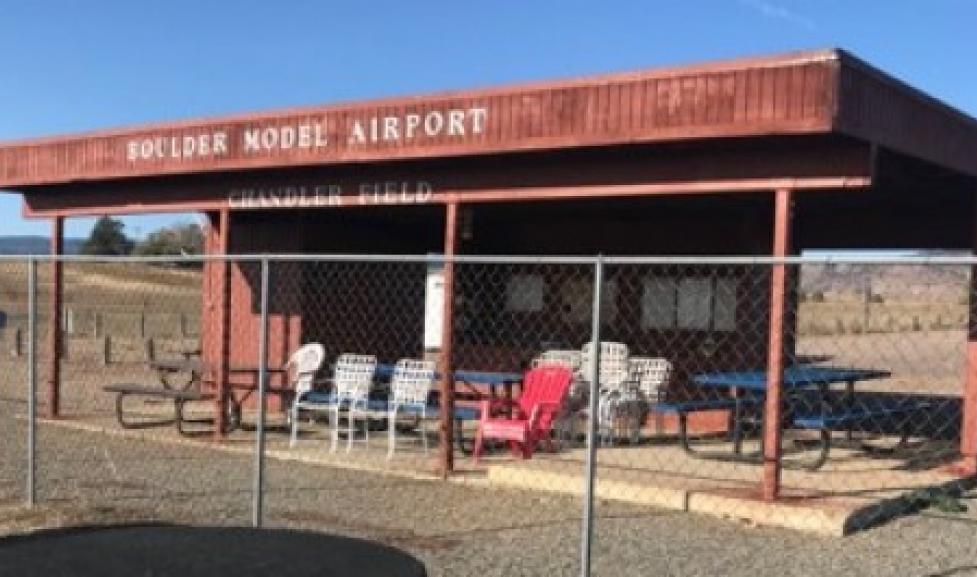 The Boulder Model Airport has been located on the northwest quadrant of Parks and Recreation property surrounding the Boulder Reservoir since at least 1980. This unique facility allows for the operation and enjoyment of model aircraft by the general public ("small unmanned aircraft" as defined by Federal Aviation Administration regulations).

The property is owned by the City of Boulder Parks and Recreation Department, while Boulder Aeromodeling Society has a license for the operation of the airport facility.

3. Flyers shall maintain flight over Parks and Recreation Property, south and east of 55 th Street, and shall not allow model aircraft to cross to the west or north of 55th Street.

4. Flight occurring during the seasonal wildlife closures must adhere to posted flight restrictions.

5. All model aircraft weighing more than 0.55 pounds, or 250 grams, must properly display a Federal Aviation Administration (FAA) registration number on its exterior, as well as AMA registration information and/or contact information.

6. Unless flyer can provide proof of flight under other FAA rules, all flyers must fly according to Academy of Model Aeronautics (AMA) Safety Code, which includes, without limitation, the following provisions :

a. Model aircraft shall not be flown in a careless or reckless manner, as defined by the FAA:

b. The flight of model aircraft will not interfere with and will yield the right of way to all human-carrying aircraft.

c. Model aircraft will not be flown under the influence of drugs or alcohol.

d. Model aircraft will not be flown directly over unprotected people, moving vehicles, or occupied structures.

e. Flyers must maintain visual line of sight, per FAA regulation 14 CFR 107.31, on model aircraft without enhancement other than corrective lenses prescribed to the flyer.

i. 14 CFR107.31 – Visual line of sight requires pilots of small unmanned aircraft to be able to accurately assess the aircraft’s location, attitude, altitude, direction of flight, and proximity to other traffic or hazards in the airspace.

g. Model aircraft will not be flown closer than 25 feet to any individual, except for the pilot and their assistant, during take-off and landing, or as otherwise provided in AMA’s Competition Regulations.

7. Model aircraft must yield to other aircraft needing to make an emergency landing.

8. Pilots may not stand on the runway for any reason other than incidentally occupying the runway to place or retrieve an aircraft. During flight, pilots must stay west of the north-south runway.

9. All model aircraft must be equipped with a muffler which controls noise levels to, or below, 97 decibels at 3 meters from the aircraft.

10. The following flight types and model aircraft are prohibited:

a. Free flight ( aircraft with no active external control after launch )

b. Control line flight (aircraft controlled by one or more lines attached to the aircraft and held by the pilot)

e. Large aircraft over 55 pounds, unless flyer can provide proof of certification under AMA’s Large Model Airplane Program or has been deemed airworthy through the CU Office of Integrity, Safety and Compliance

11. All spectators must remain in the designated spectator area, unless accompanied into flight areas by a pilot.

12. All dogs must be on a leash held by a person. Dogs are not permitted in the flight areas or East of the shelter fence.

13. No parking is permitted in the designated accessible areas unless a valid Handicap Permit is displayed on the vehicle.

14. Parking lot is only to be used to access the Boulder Model Airport. Access to the parking lot is not guaranteed during operating hours. Public parking is always provided in designated spots outside the fence along 55 th Street.

15. No person shall engage in non-recreational use, including without limitation commercial, industrial, educational, and research uses, of the Boulder Model Airport without prior written approval of the Boulder Parks and Recreation Department, except as follows:

a. CU-Boulder students, faculty and staff engaged in official use must fly according to the University of Colorado Boulder Unmanned Aircraft Systems Flight Operations Manual, maintained by the CU Office of Integrity, Safety, and Compliance . Official use includes instruction of students, student projects, faculty research and testing, and routine accuracy and currency flights related to work for CU-Boulder.

Each year, flight restrictions go into place to protect several nesting bird species of conservation concern. These species include: Burrowing owl, American bittern, Osprey and Northern harrier. The area around the Boulder Model Airport provides important nesting habitat for these species. It is critical to balance the needs of the species with the use and enjoyment of the Model Airport.

Northern Harriers, American Bitterns and Burrowing Owls are ground nesters which make them particularly vulnerable to disturbance by foot traffic. During the seasonal restrictions, downed aircraft are only to be retrieved by trained members of City of Boulder staff or Boulder Aeromodeling Society. If you need assistance retrieving a downed aircraft, please contact Boulder Aeromodeling Society for a list of trained members or call 303-413-7200 and follow the prompts to leave a voicemail for the Natural Lands team.