Do “Politicians Have the Will Power to Save Our Planet”? Rep. Neguse Talks Federal Climate Policy at Boulder Forum 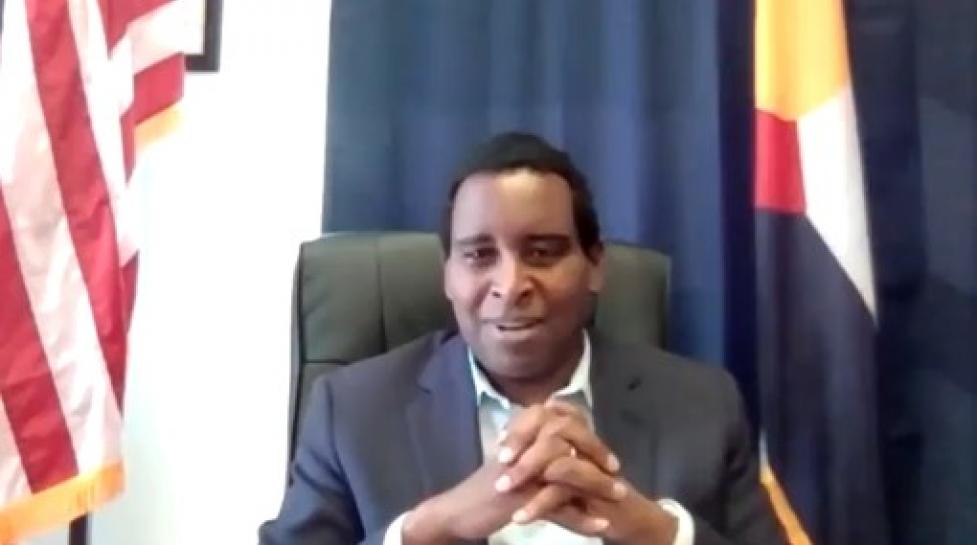 Congressman Joe Neguse joined the Boulder Forum to talk about the climate-centric legislation on the docket in Washington and why the time to act is now.

It had been a busy week for Congressman Joe Neguse, and it was only Wednesday.

The U.S. representative for the second district of Colorado headlined the fifth panel event of the Boulder Forum on Economy, Climate and Community.

The day prior to the Boulder Forum event, Congressman Neguse welcomed President Joe Biden to Colorado — and, more specifically, to our district — to highlight our state’s leadership on energy and climate action.

Biden and Neguse were part of a delegation that toured the National Renewable Energy Laboratory’s Flatirons Campus, just south of Boulder.

Congressman Neguse cleared time in his schedule to speak to some of the climate-centric legislation that is on the docket in Washington, and how we can connect climate action at the federal level to the local.

Whose Job is it to Act?

It’s an exciting time to be in Congress, according to Neguse, who serves as a member of the House Natural Resources Committee and the House Select Committee on the Climate Crisis, as well as Chair of the Subcommittee on National Parks, Forests and Public Lands, among others Congressional leadership roles.

“Right now, the Congress is poised to make more progress on climate action than it has ever done in the history of our country,” said Neguse.

And there’s not a minute to lose.

According to Neguse, one in three Americans, this year alone, have been touched by natural disasters.

From 2020’s historic wildfire season to the record-breaking poor air quality across the Front Range this summer, the advent of climate change has made itself known in dramatic fashion.

“It’s worth repeating: the climate crisis is here, our communities are experiencing it, it is happening all around us and not at some uncertain date into the future,” said Neguse.

He said that, in Washington, there’s no longer equivocation over “human-caused climate change.”

“The debate has shifted to ‘Whose job is it to act? What solutions do we deploy to reduce the impacts?…and whether politicians have the will power to save our planet,’” he said.

With more than one trillion dollars in climate-related investments on the table as part of the Build Back Better (BBB) Act, Neguse and his colleagues in Congress are poised to act.

Encapsulating a host of climate provisions, BBB will fund new clean energy tax incentives and the transformation of the power sector to achieve 100% clean electricity, as well as codify the first ever clean energy standard, too.

In the congressman’s own words, it’s “a plan that would put hundreds of thousands of people back to work restoring our lands and communities and tackling the climate crisis as well.”

The 21st century incarnation of the CCC will tackle community resilience programs across the country, such as wildfire mitigation efforts and wetland and coastal restoration projects, while reflecting the rich diversity of our country.

“It’s a once in a generation investment in our forests, and in a new, diverse workforce to prepare us for the future,” said Neguse.

And Rep. Neguse would know a thing or two about the promise of this type of program: just last week, he was up in Nederland to launch the Colorado Climate Corps.

The first iteration of the Colorado Climate Corps will set its sights on wildfire and flood mitigation, improving the health and resiliency of public lands, retrofitting homes of low-income community members to conserve resources and to lower utility bills, and more.

The Colorado program can serve as a model for what’s possible at the federal level.

“I spend a lot of time in Washington…convincing my colleagues to try to emulate what Colorado has done so successfully,” said Neguse.

“Everybody Has Skin in the Game”

Neguse speaks to the threat of climate change with a sense of urgency.

He explained that it’s not just his passion for the issue, but also, his concern over the world his young daughter will one day inherit.

“We’ve gotta get it done and we need everybody to be part of the solution, from our local and state governments, of course the City of Boulder, our federal climate scientists, nonprofits, universities, businesses, everyday citizens,” he said.

“Everybody has skin in the game, and everybody has to be at the table to help us solve these challenges.”

Learn more about the Boulder Forum.