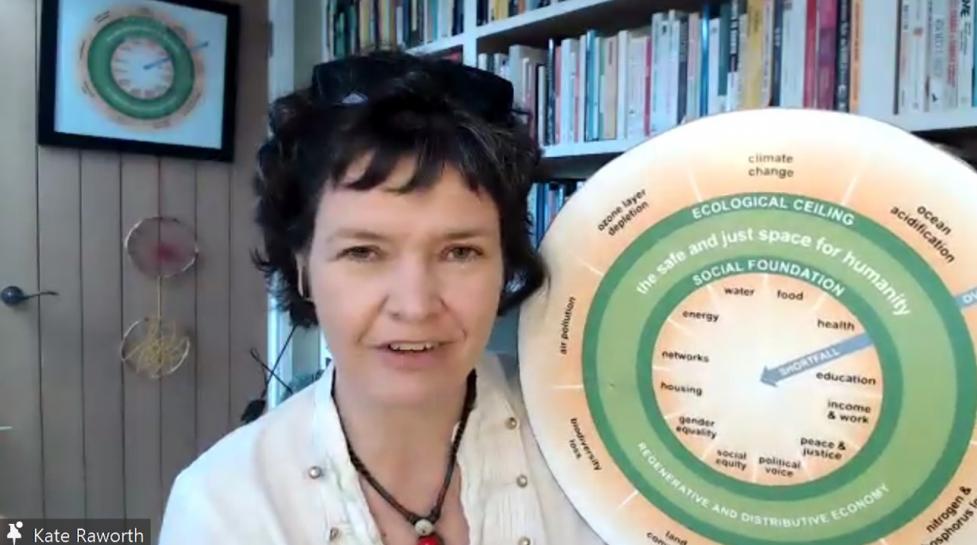 Forget the sprinkles, glaze and frosting: the only doughnuts that are good for us are the conceptual ones, according to Kate Raworth.

Raworth, the famed “renegade” Oxford economist and author of “Doughnut Economics: seven ways to think like a 21st century economist,” captivated the audience at the third segment of the Boulder Forum on Economy, Climate and Community.

The six-part webinar series explores the role of the economy in driving climate change, as well as its potential role in climate stabilization — and Raworth’s presentation was a timely one for the city.

Jamie Harkins, mainstage moderator and Interim Manager of the City of Boulder’s Zero Waste Team, framed the event in the context of the circular economy.

Harkins explained that while Boulder has a long history of cutting-edge zero waste efforts, in recent years it has become increasingly obvious that “we can’t just recycle or compost our way out of the problems we see in the world.”

In the coming months, Boulder will be drilling down on how we can broaden our approach to climate action to ignite systemic change — and shaking up the system is undoubtedly Raworth’s area of expertise.

“A direction that no nation has been before”

All three crises have arisen from systems we created, “systems based on the presumption of endless growth,” said Raworth.

As we begin to rethink our economic and social models, Raworth suggested we do away with the familiar labels.

“There is no ‘developed’ nation here: we are all on unprecedented paths of transformation,” she said. “Every nation needs to go in a direction that no nation’s been before — toward the doughnut.” 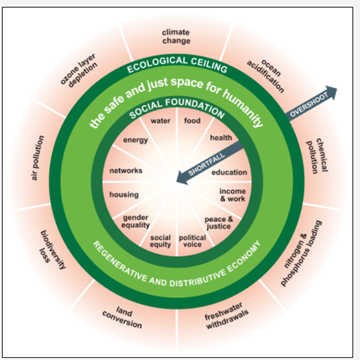 In simple terms: We must redefine and align our economic boundaries with our planetary boundaries.

To do that requires a conscious shift away from today’s “take, make, use, and throw it away” economy and toward a circular, regenerative economy, in which resources are not used up, but rather are used again and again.

So, how do we bring about this evolution in thinking and action?

It begins with “The City Doughnut.”

Every city must ask itself: How can our city become a home to thriving people, in a thriving place, while respecting the wellbeing of all people and the health of the whole planet?

The end goal is to both meet the basic needs of the city residents, while being mindful of the impacts of our choices on the world around us.

“We need our own ideas”

Sourcing local solutions is central to the city doughnut approach.

“The answer…lies with the people of a place, with their knowledge, experience, their understanding and their co-creation,” said Raworth.

As Boulder and other cities begin to reevaluate their economic approach in service of equity and sustainability, Raworth offered some sage starting points and words of advice:

Ultimately, local introspection and community-led action will win the day.

“If we’re going to solve this, if we’re going to turn this story around, we need to bring economic ideas and theories and governmental policies and business models and community action of our own. We need our own ideas.”

Learn more about the Boulder Forum and the Doughnut Economics Action Lab.