Getting from Here to There: Kim Stanley Robinson Envisions a Better Tomorrow at Final Boulder Forum Event 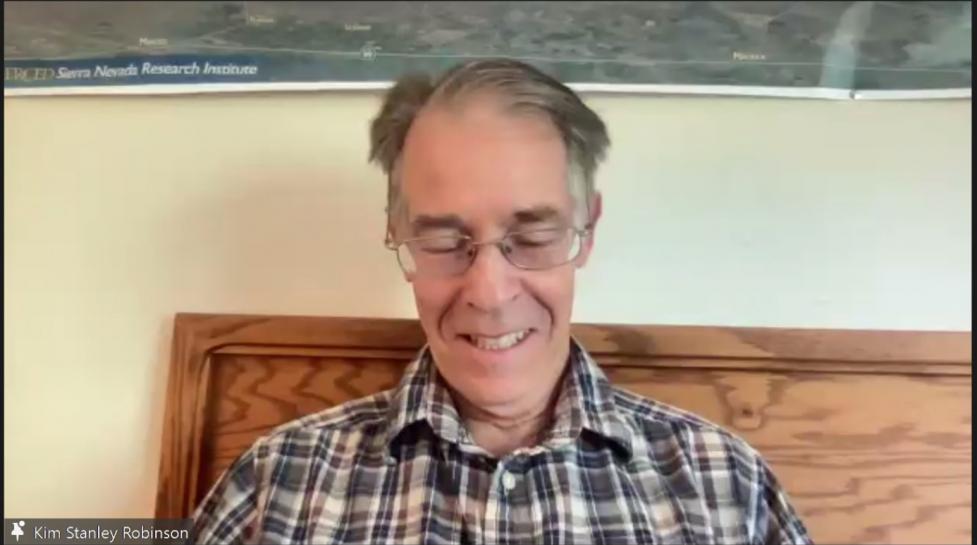 In the sixth and final installment of the Boulder Forum, Robinson envisioned how the economy could be redirected to enable a de-escalation of climate change.

“Imagining a better system is easy as pie,” said Kim Stanley Robinson. “The hard thing for us to imagine is getting from here to there.”

The award-winning science fiction writer headlined the final panel event of the Boulder Forum on Economy, Climate and Community this week.

Robinson joined the forum to discuss climate-change related themes appearing in his most recent novel, “Ministry for the Future,” as well as “the economic changes that we need and how they might play out going forward — in a good way.”

A fitting keynote speaker to cap off the six-part series, Robinson leveraged both science and imagination to posit a path forward in addressing the greatest challenge of our lifetime — climate change.

Decarbonization as a Career Choice

In a world where the fossil fuel industry is subsidized $11 million dollars each minute, action must be bold and transformative.

“We’re trembling on the brink of a mass extinction event and extreme climate change that would hammer human civilization…it’s an all-hands-on-deck moment,” said Robinson.

“We are organized here on this planet…in a nation-state system, in a global capitalist economy, and neither of those are well-suited to deal with the problems that we’re facing with climate.”

In Robinson’s view, the economy must evolve to incorporate decarbonization into every sector.

“You can’t solve the climate crisis by virtuous actions on the side as a citizen, as a sort of charity work that you do when you’re not doing your job — particularly when the work you’re getting paid to do is either irrelevant to the climate crisis, or else adding to it,” he said.

“You need to be able to make your livelihood, to make a living…doing decarbonization work as careers,” he said.

You Say You Want a Revolution

Robinson doesn’t need to consult a crystal ball to see the crisis in plain view.

He pivoted from praise for our beautiful Boulder Creek to grave concern for the growing water crisis stretching across the American West.

“People still aren’t paying attention to water, which is a little crazy, because we depend on it and we’re going to be running out of it,” he said.

And revolution is on Kim Stanley Robinson’s mind — or, more accurately, whether it’s possible to gain the benefits of revolution, minus the uncertainty and violence.

He cited the State of California’s landmark 2014 Sustainable Groundwater Management Act as an example of just such a revolutionary act.

“It’s an amazing piece of state legislation,” he said. “It essentially returned ground water from privatized property to a commons that everybody has to attend to.”

“It’s interesting to think that every major change in the law that captures power for the public over the private could be regarded as a revolution,” said Robinson.

Despite his uncanny ability to seemingly predict the future, Robinson admits that the timeline in his novel was off — humanity will be called up to the plate much sooner than anticipated.

“The 2020s are going to be the decade, not the 2030s or 2040s,” said Robinson. For the sake of our own survival, we must take control of the economy and push it in the direction it needs to go, he said.

So, how does Robinson see the future unfolding? With power resting in our hands to demand and enact change.

“And in 2030, we might be in quite a bit a better place,” said Robinson. “The tide may be running in people’s real work…doing work to combat climate change…that might be the dominant tide, but only if we make it so.”

Learn more about the Boulder Forum and the Climate Initiatives department.