“Boulder Can Be a Laboratory That Shows How Systems Can Change:” A Boulder Forum Q&A with Steve Fenberg 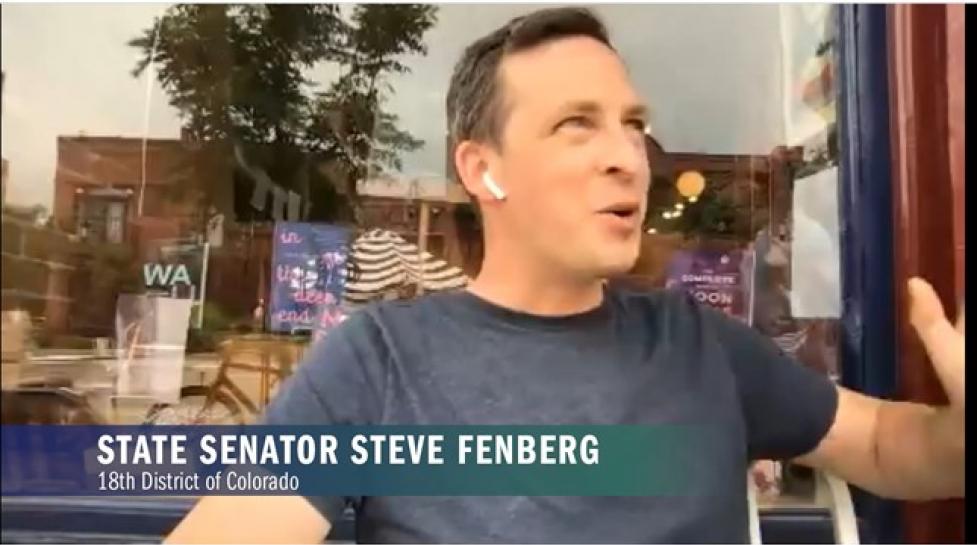 It’s been a busy few months for Steve Fenberg.

Fresh off the heels of a prolific legislative session, the Colorado state senator and his colleagues in the legislature tallied a staggering number of climate policy wins this year alone.

He grabbed himself a cup of coffee and stopped by the Boulder Forum on Economy, Climate and Community to talk through some of them with the City of Boulder’s Interim Director of Climate Initiatives, Jonathan Koehn.

Though COVID recovery necessarily took center stage this past session, the Senate “didn’t miss a beat on the climate agenda items,” said Fenberg.

Koehn ran down the exhaustive list of key climate-focused legislation championed by Fenberg this year:

A highlight, according to Fenberg, was Senate Bill 181, which changes how we regulate and permit oil and gas in Colorado. He also pointed to the “big ticket item” — Senate Bill 1261 from 2019 — which stipulates overall climate reduction goals for the state.

These two bills were the big framework pieces that “we knew we needed to do once we had the majority to get it done,” said Fenberg.

Ensuring that the state of Colorado remains on the forefront of climate policy is a priority for Fenberg and his fellow Democrats in the Senate.

“We are doing everything we can to move forward as fast as possible, making sure that no other state does anything more innovative than us because we always want to stay on the cutting edge, and a lot of that comes from the expertise and the leadership of the Boulder community,” said Fenberg.

“Capturing how people use roads today”

The recently signed transportation bill (SB-260) was another advancement in climate action this session.

From the competing interests of rural, urban and suburban communities, to the push-and-pull between emissions impact and traffic concerns, getting the bill over the finish line required hundreds of hours of meetings to wrangle the “complicated thicket of stakeholders” involved.

Though the resulting bill was undoubtedly a give and take, Fenberg believes that within it, there is a lot to celebrate.

“It is the biggest investment in electrification in our state’s history, if not one of the biggest in the entire country,” he said.

The bill also invests in air quality mitigation projects to address the disproportionate impact transportation has on communities of color and low-income communities.

An increase of the gas tax is also a feature of SB-260.

The modest gas tax increase (eight cents over the next ten years) is not intended to change behavior, but rather provide a much needed expansion to the state's revenue base.

As Fenberg explained, in 30 years’ time, the state’s gas tax has never been adjusted keep up with inflation.

In fact, if Colorado’s gas tax had kept pace, the current 22-cent-per-gallon tax would amount to 44 cents per gallon, generating twice as much revenue as it does today.

The bill also aims to “capture how people use roads today versus how they used roads 30 years ago,” introducing fees on Amazon deliveries, Uber rides, rental cars, car sharing and more, said Fenberg.

Righting past wrongs of the environmental movement

Recognizing its nexus with the transportation bill, Koehn shifted the conversation to Bill 1266, the Environmental Justice Disproportionate Impacted Community bill.

According to Fenberg, while the 2019 Climate Action Plan (Bill 1261) set the framework for carbon reduction goals over time, there was still a need to mandate enforceable and accountable sector-by-sector emissions reduction targets.

Beyond the stipulation of such targets in several key sectors of the economy, 1266 includes provisions to create an environmental justice ombudsman. The body will be tasked with evaluating complaints related to pollution impacts on vulnerable communities.

The bill “rights some of the wrongs of the environmental movement over the last several decades where we…plowed ahead without including everyone in the conversation that was impacted,” said Fenberg.

“That shaped the bill and the drive for it,” he said.

Boulder’s place at the table

From our community’s conversations around municipalization to its power to influence state policy to our burgeoning partnership with Xcel Energy, Fenberg can readily see Boulder’s place at the table.

The city is in the driver’s seat, and he believes Boulder has a responsibility to act.

“I think that the impact that the community of Boulder can have is much larger than just simply the carbon footprint of our citizens here,” said Fenberg.

“And I do think that the systems-level change has to be a priority,” said Fenberg. “Boulder can be a laboratory that shows how systems can change.”

Learn more about the Boulder Forum, watch the video and read the recap of the mainstage panel.

“I think that the impact that the community of Boulder can have is much larger than just simply the carbon footprint of our citizens here."