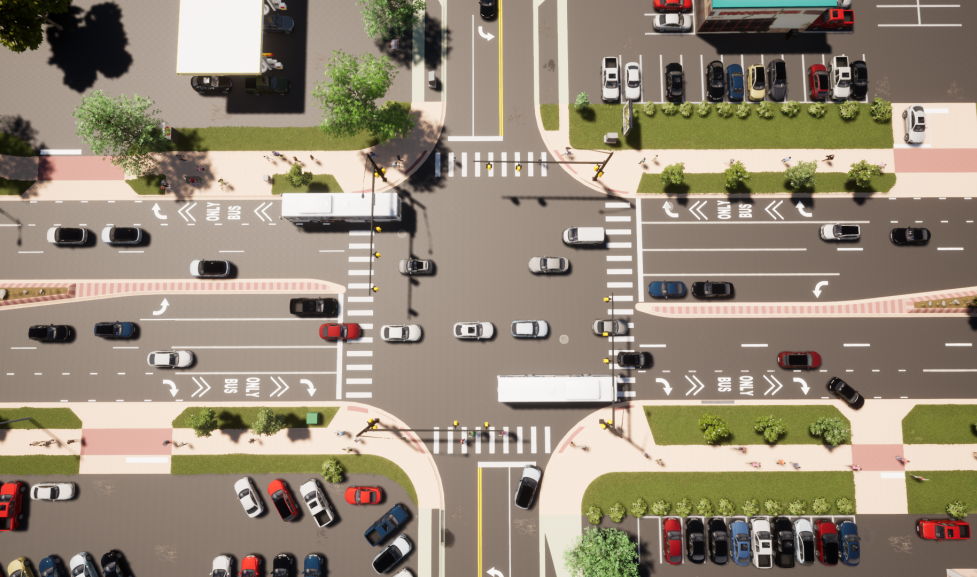 28th Street is a state highway and a gateway to Boulder for employees, visitors, students, and residents. Corridor planning beginning in the early 2000’s, with a cutting-edge Complete Streets design which has since evolved to sync with other regional projects and the community’s current and future transportation needs.

Improvements to the segment from Iris to Canyon will begin in 2022. Staff held two August 2021 Project Info Sessions. You can view a recording below.

CDOT is resurfacing portions of 28th Street/US-36 beginning mid-May through September 2021. For updates, view CDOT's project page. You can also view www.BoulderConeZones.net, where staff will provide updated traffic impacts from CDOT as we receive them.

Once the 28th Street Improvements Project (Iris to Canyon) is completed, 28th Street from Baseline Road to Iris Avenue will be transformed into a multimodal corridor with a consistent design that delivers transportation, safety, aesthetic and economic enhancements.

This is the final segment of 28th street slated to receive improvements as part of this corridor-wide improvements effort. The funding impetus for this project is founded in the corridor’s status as a primary state highway through Boulder, its status as a high crash corridor, the desire to increase the safety and presence of bicycle and pedestrian facilities here and the crucial need for enhanced transit service along this corridor.

The following improvements will be constructed along this segment:

A key component and goal for this project is to maintain the continuity of corridor-wide design in keeping with the design of segments to the north and south. Foundational decisions were made during preliminary design (with stakeholder input) including the consistency of travel lane widths (all 11-feet), 10-foot multi-use paths (per city standards) and 8-foot landscaping strips. Additionally, the locations of transit stops were solidified at this time.

The constructed improvements will sync with the regional CO 119/Diagonal Bus Rapid Transit (BRT) Project, which will include the addition of a managed/express lane and construction of a paved bikeway (view the route here) from Boulder to Longmont. BRT stations will be installed at Iris, Valmont, Pearl and Canyon in conjunction with the 28th Street Improvements Project.

This BRT project is spearheaded by a coalition comprised of the City of Boulder, City of Longmont, Boulder County and Commuting Solutions. Also involved in the planning and process are RTD, CDOT, High Performance Transportation Enterprise (HPTE) and the local area chambers.

The primary purpose of the project is to enhance regional bus service capacity on 28th Street/US-36, which is one of the busiest corridors in the city. From Iris Avenue to Pearl Street, the project will add continuous BAT (Business-Access-Transit) lanes to 28th Street, which are lanes prioritized for transit and also used by right-turning vehicles. The project will also improve the bus stops (including enlarging boarding areas) on both sides of 28th Street, so buses can load/unload passengers in the BAT lane without experiencing or causing additional delay. 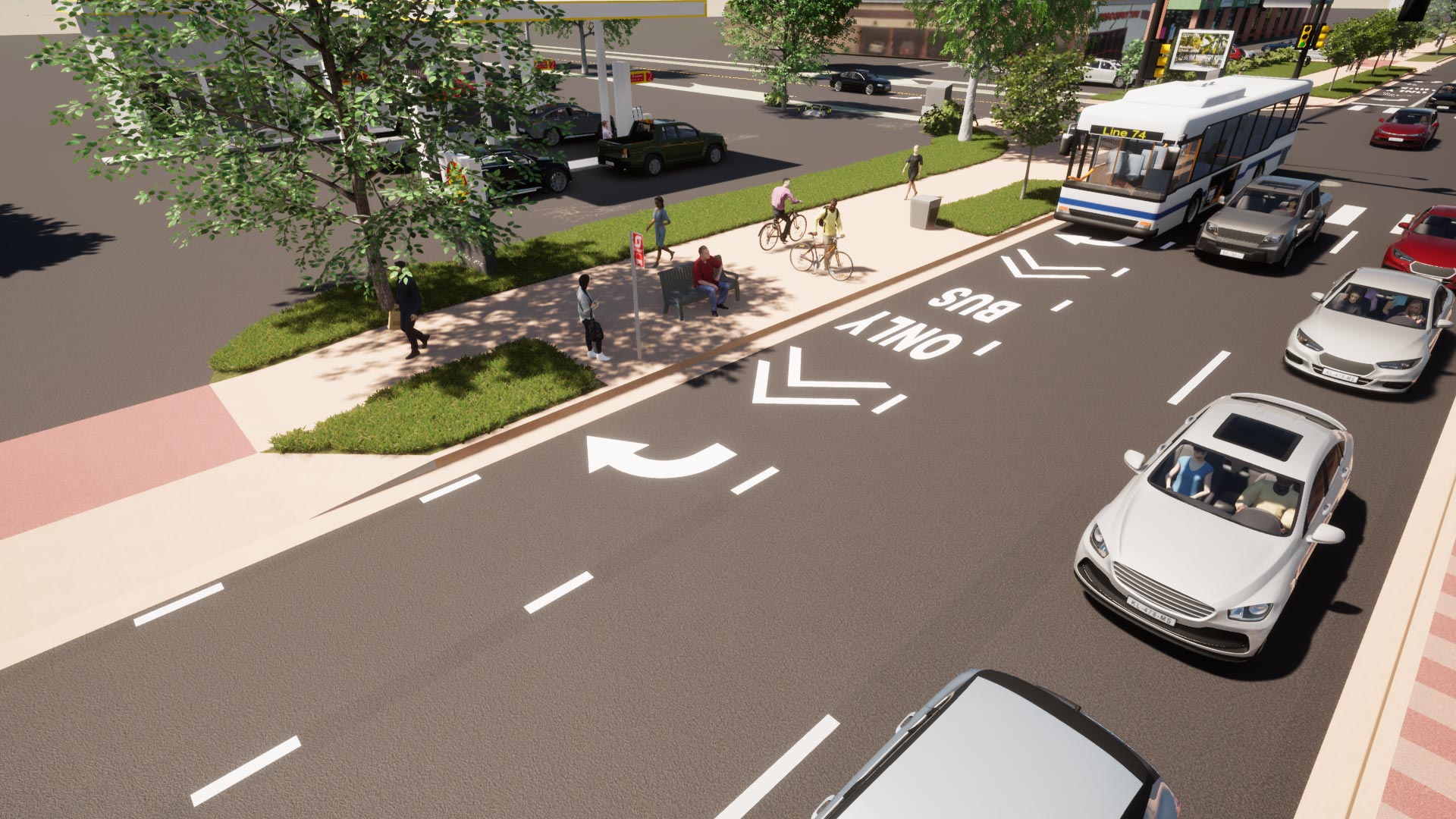 These enhancements will equip 28th Street to offer future CO 119/Diagonal Bus Rapid Transit (BRT) service between Boulder and Longmont. Phased conversion of the third outside lane from Pearl to Canyon is planned for future years as BRT service comes online. In addition, the project will fill in missing links in the multi-use paths along both sides of 28th Street, to create a continuous north-south multi-use path facility from Baseline Road to Iris Avenue. This improvement is consistent with recommendations from the city’s Low Stress Walk & Bike Network. 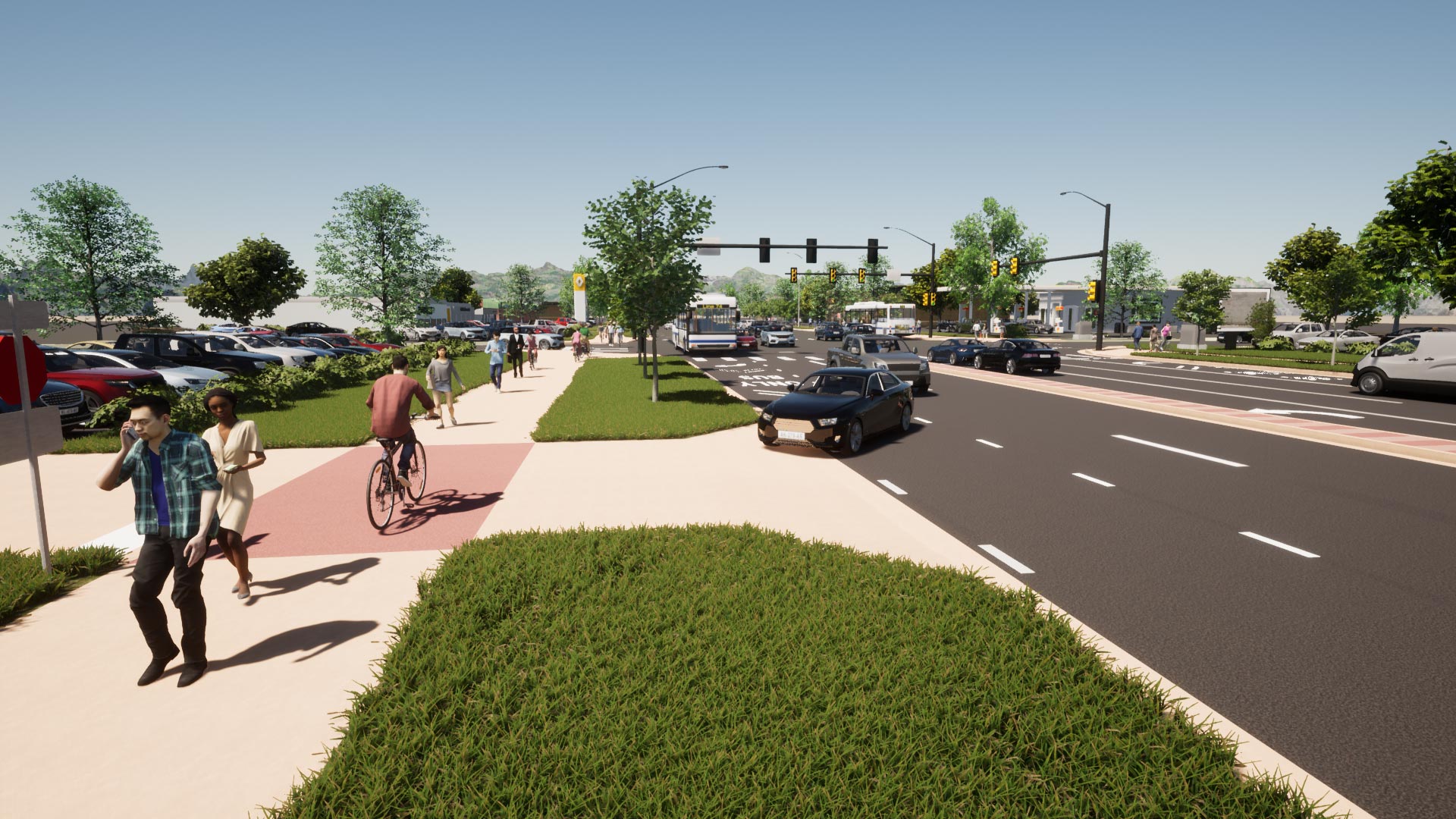 Benefits include more convenient and reliable transit service, including increased transit efficiency along 28th Street in conjunction with implementation of future CO 119/Diagonal BRT service. The project will provide additional travel choices for individuals commuting into Boulder as well as employees of 28th Street businesses, one of the main commercial centers in the city. Additionally, the project will provide enhanced cyclist and pedestrian access along 28th Street via the installation of a continuous north-south facility multi-use path facility on each side of the street.

This project is the last phase of a larger project, first launched in the 1990s, aiming to improve transportation on 28th Street between Baseline and Iris. 28th Street was chosen for improvements because it is one of the busiest corridors in Boulder, is a major north-south connection serving many residents, commuters, and visitors, and is a major center for retail and business. These factors make it a top candidate for travel enhancements, particularly in the area of transit service.

Construction will begin in 2022 and last for approximately 6-9 months. The final design of the project must be completed by the end of 2021 to comply with requirements for federal and regional funding.

As outlined in the city’s Transportation Master Plan, increasing transit capacity is key to meeting the needs of the Boulder community and all who visit, work and play here. The improvements on 28th Street will enable the corridor to provide CO 119/Diagonal Bus Rapid Transit (BRT) Service. This connection will help many current commuters who travel into/out of Boulder by car to switch to faster, more convenient transit service. Improving regional travel connections and providing more attractive, non-vehicular options for in-commuting is key to decreasing greenhouse gas emissions, meeting our city's Climate Commitment goals and providing more comfortable, efficient and convenient travel for all, no matter the mode of transport used.

The dedicated BAT (Business-Access-Transit) lanes being added to 28th Street will be used only by buses and right-turning vehicles, which will reduce conflicts between buses and through-traffic. Currently, buses are required to merge with all other traffic at multiple points along the corridor, impacting efficient bus travel. The multi-use path sections added along both sides of 28th Street will be complimented by raised driveway crossings, have warning signage at exits and colored striping bars where warranted, all of which will increase safety and visibility. This design is in keeping with current Vision Zero engineering best practices intended to improve transportation safety.

Staff plans to investigate additional strategies that could be implemented through this project to further enhance safety, including: completing a full corridor evaluation of vehicle turning movements to understand if any locations would benefit from right-turn-on-red restrictions or other traffic signal modifications; investigating the installation of a neckdown (AKA a bulb-out or curb extension) at Pine, Spruce and Bluff to implement a shorter crossing distance for pedestrians and bicyclists; and evaluating corridor traffic signals where Leading Pedestrian Interval (LPI) signal timing (which provides an additional head start for pedestrians crossing intersections), could be added. Improvements to left-turn signal phasing will be implemented at the Glenwood and 28th and Mapleton and 28th intersections when the project makes required upgrades to the traffic signal poles.

No. A third outside lane (already striped as a Business-Access-Transit (BAT) lane in some areas) currently exists on the majority of the project corridor. This project will repurpose portions of the existing third outside general purpose vehicle lane into a BAT, and expand the BAT lane where only two lanes currently exist, to complete missing links and create an uninterrupted lane prioritized for bus service. The BAT lane will not increase vehicle capacity along the corridor; rather, it will allow for enhanced access to businesses along 28th Street and improve the convenience and attractiveness of transit service.

Staff don’t anticipate this project will result in any noticeable increase in vehicle speeds. For the majority of the corridor, a third outside lane already exists. In 2019, the average measured speed in the corridor was 26 mph. Generally, the speed used to calibrate signal timing is the posted speed limit, which is 35 mph for this segment of 28th Street, though many factors influence traffic signal progression and actual progression speed, including spacing between traffic signals, traffic volume, queuing, left-turn phases and cycle length. Staff will continue monitoring speeds along the corridor prior to and after project implementation, including examining signal progression speeds during project design.

No. 28th Street is a regional corridor and one of the busiest freight corridors in the city, which makes it ideal for transit service and vehicular travel as opposed to walking and bicycling. The city is working to enhance walking and bicycling facilities on parallel corridors, such as Folsom and 30th streets, to provide safer and lower-stress routes that can be used to access 28th Street businesses or to travel downtown.

No. In previous project designs, the city was considering adding what’s known as a Bike-Business-Access-Transit (BBAT) lane, which is a lane striped for bicyclists to use in addition to buses and right-turning vehicles. However, in keeping with best practices identified in research on peer cities and in response to recent community feedback, staff has modified the design and will remove the striping for bicyclists, resulting in installation of a BAT (Business-Access-Transit) lane instead. The lane will serve primarily as a bus lane, enhancing transit service capacity on this important corridor. Cyclists and pedestrians are encouraged to use the multi-use path facility present on both sides of 28th Street (providing continuous access from Baseline to Iris following this project's construction) and which is the facility type recommended for this corridor from the city's Low Stress Walk and Bike Network Plan.

No. While the vision for the corridor was developed in the late 1990's supporting the land uses in the Boulder Valley Comprehensive Plan (BVCP), substantial work has been done since then to design the 28th Street corridor projects, such as the 2014 Revised Vision for Transit, which incorporated extensive public outreach and engagement. This visioning informed preliminary design work in 2017 and 2018 with a focus on development of a transit-priority corridor to support future CO 119/Diagonal BRT service. The improvements planned for 28th Street from Canyon to Iris represent the final phase of this corridor-scale effort. All plans for Iris to Canyon represent current best practices in transportation facility design, through enhancements to the roadway, traffic signals, signs and pavement markings, and reflects Boulder’s commitment to advancing safe, multimodal travel infrastructure.

These improvements have been funded with a number of sources, including $1.3 million in city transportation funds and $4.7 million from the Denver Regional Council of Government's (DRCOG)'s Transportation Improvement Program (TIP). 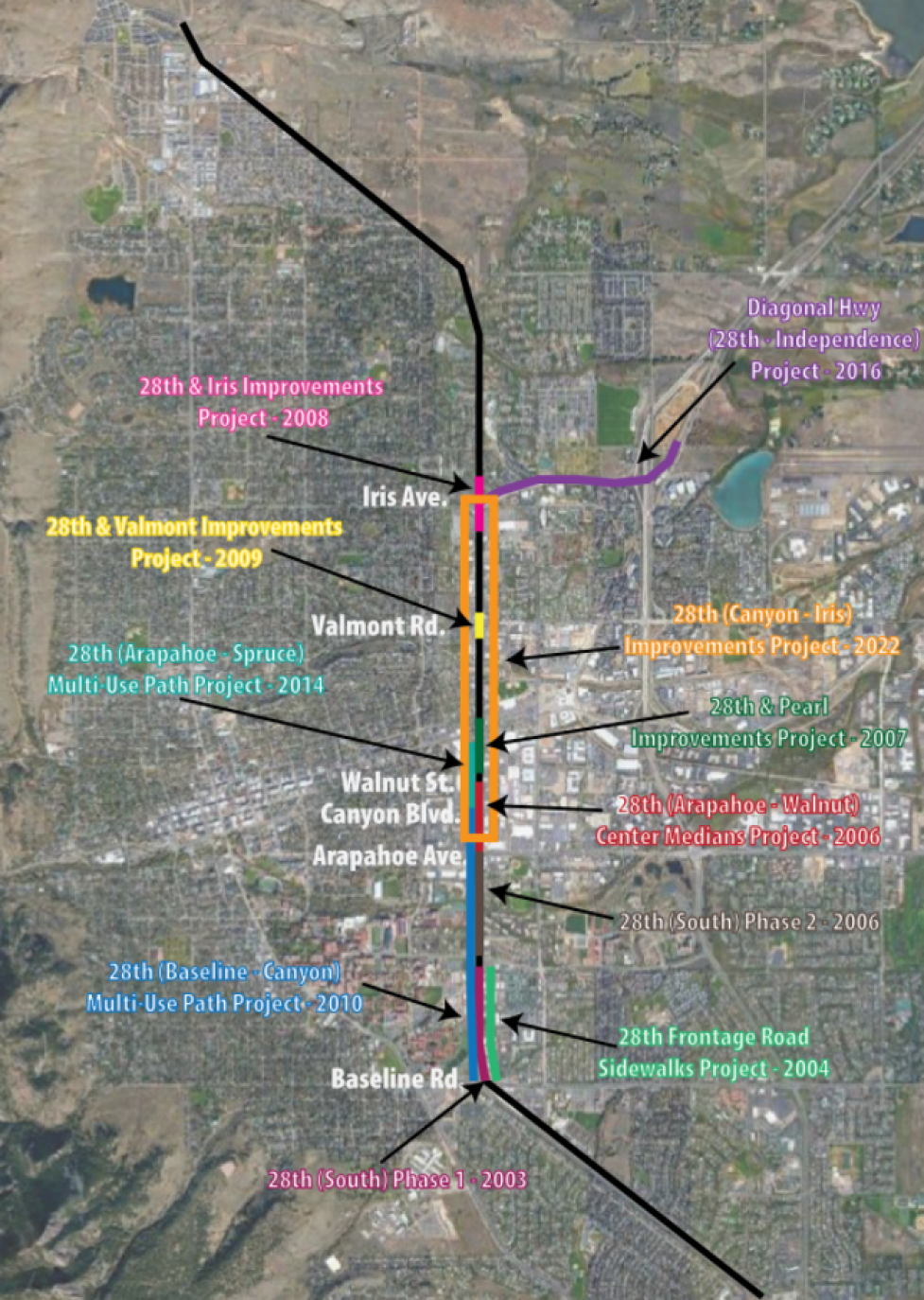 In 2008 and 2009, safety improvements were made at the intersections of Iris and Valmont. Additionally, the Diagonal Highway Project (28th - Independence), completed in 2016, provided key connections to the 28th Street corridor.

Multimodal improvements included a project to improve the center medians between Arapahoe and Walnut (2006), intersection improvements at Pearl Parkway (2007), new sections of multi-use path along 28th Street between Arapahoe Avenue and Spruce Street (2014) and a shared bus/bike/right-turn lane and new multi-use path along the east side of 28th Street between Pearl Street and Valmont Road.

A new 10-foot-wide multi-use path along the west side of 28th Street between Iris Avenue and Fourmile Canyon Creek, pedestrian and bicycle bridge over Fourmile Canyon Creek and continuous on-street bike facility on 28th Street between Iris and Yarmouth avenues was completed in 2015. These improvements provide an improved multimodal transportation system with expanded travel options for students and their families, staff, residents, employees and others traveling through the area. Public art at the bridge and southbound bus stop beautify this bicycle and pedestrian improvement. Funding for this section of 28th Street was provided through a Federal Transportation Improvement Program (TIP) grant and city Transportation funds.

The 28th Street (Iris to Yarmouth Avenues) Bicycle and Pedestrian Improvements was reviewed through the city's Community and Environmental Assessment Process (CEAP). A public hearing was held at the May 13, 2013 Transportation Advisory Board (TAB) meeting and the board recommended approval of the project CEAP and recommended design options. The CEAP document was forwarded to City Council for potential call-up by July 16, 2013. After not being called up, the project proceeded toward final design.