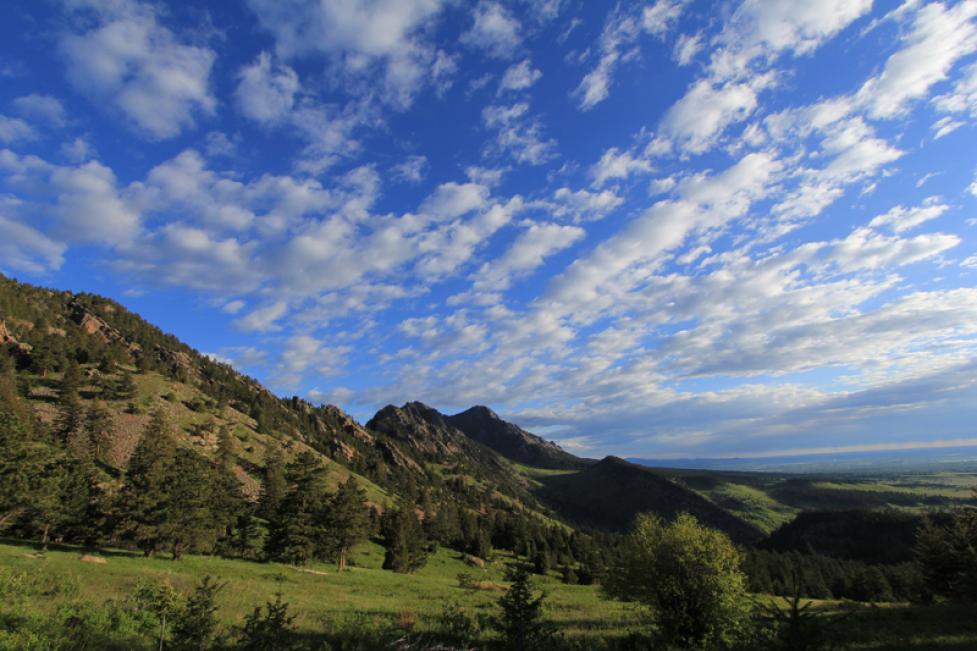 Hike of the Month – Flagstaff Summit 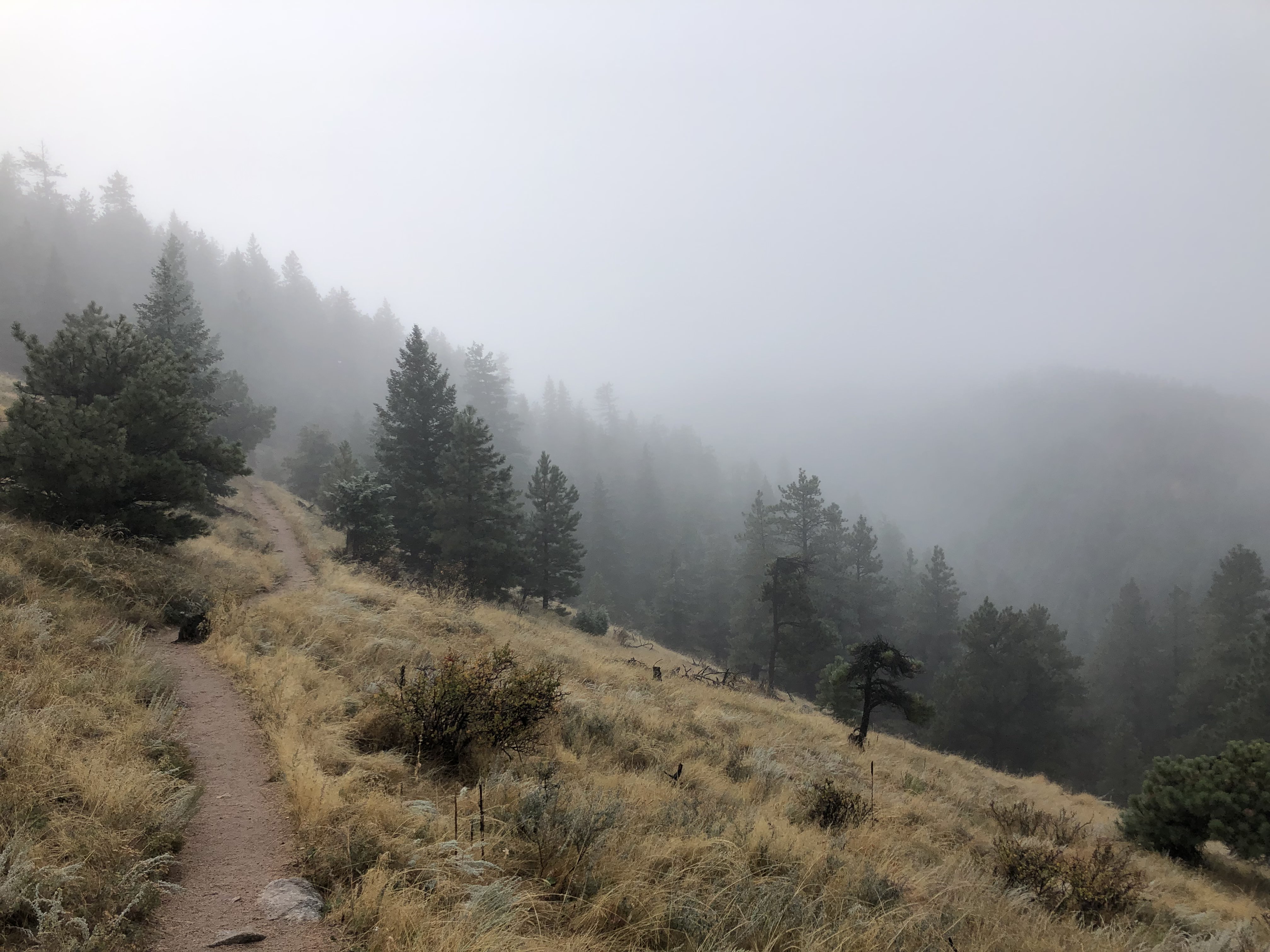 Tenderfoot Trail in the fog by OSMP Staff

Once the summer's hustle and bustle is over, quiet descends on the forest. This is especially true of the summit of Flagstaff Mountain. When the road to the summit is closed for the season at the end of October, the summit becomes a seldom-visited place of peace. Snow billows and drifts across the roadway, capturing animal tracks. Pine branches glisten with rime ice or bend under the heavy weight of snow. Try hiking a loop from the parking lot at Realization Point up the Ute Trail and back along the road. Or if you're more ambitious, drop down the Chapman Drive Trail and loop back on Tenderfoot Trail. Watch for animals. The forest may be quiet, but it's not sleeping!

In 2022, the Winter Solstice – the shortest day of the year in the northern hemisphere – occurs on December 21 at 2:47 p.m. MDT. Winter will officially begin at that instant, although we may enjoy the snow, ice and cold of winter before the solstice! Curiously, the earth is actually closer to the sun in January by 3 million miles, since its orbit is a nearly circular ellipse. That makes little difference to our temperatures, however: the most important factor is the 23.5 degree tilt of the earth's axis. This places the sun at its southernmost latitude on this day, so most of the sun's heat and light are directed at the southern hemisphere. At the Arctic Circle, the sun will not rise at all during the “day.” In Colorado, our day length will be greatly reduced (the sun will not rise until 7:20 am and will set at 4:39 pm).

Cultures all over the world celebrate this time of year with light: the Menorah of Hanukkah, Christmas lights and brightly lit trees, and merrily-burning Yule logs. The word "Solstice" comes to us from Latin, " Sol stitium " meaning "sun stationary."

Take a hike in the pine forest this month and pay attention to the bird life. Although many of Boulder's birds migrate for the winter, some of the most active ones stay. Listen for the Black-capped and Mountain Chickadees: their call is a nasal “chicka-dee-dee-dee.” Chickadees usually move about in flocks with other birds, such as nuthatches. OSMP has three species of nuthatches, and you can see all three on one hike if you're lucky. The largest is the White-breasted, a handsome bird with a blue-grey back and pure white breast. It often clings to tree trunks like a woodpecker. Red-breasted nuthatches are smaller and have a buff-colored belly and light eye stripe. Clown-like, they sometimes hang upside down from branches while searching for food. Pygmy nuthatches travel through the forest in large flocks, peeping and cheeping like a host of tiny squeak toys. Also watch for Steller's Jays, large dark blue birds with a dark crest like a spiky hairdo. They are smart and inquisitive and will check you out from a nearby tree. Their typical call is a harsh “Shaaack! Shaaaack!” but they also produce a very plausible imitation of a Red-tailed Hawk's scream. Magpies, Northern Flickers, and House Finches are other common birds you may see around town. 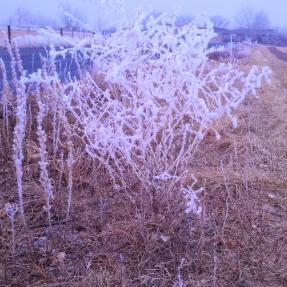 Next time it snows, go out and look closely at the crystals. These tiny flakes of ice reveal a microcosm of beauty and intricate structure. Colorado receives many different kinds of snow, depending on specific weather conditions in the clouds where the crystals form. Each crystal starts as a very tiny bit of dust in the air, providing a freezing nucleus for super-cooled water droplets. Very cold conditions (around 0° F) and high humidity in the clouds produce the many-pointed flat crystals we typically associate with snow flakes. The flakes may also appear as regular hexagonal plates without spines. When cloud temperatures are slightly warmer, flakes appear as long, thin needles that often clump together. Extremely cold temperatures produce hollow column-shaped crystals. As a crystal gently falls to earth, it may pass through air that is saturated with tiny super-cooled droplets that adhere to the crystal, coating it with rime frost. The result is graupel, round little snow pellets that look like tiny bouncy bits of white packing foam.

Although it may be an exaggeration that no two snowflakes are ever alike, each flake is formed by its own unique pathway through the clouds. A cloud contains very local differences of temperature and humidity. As air currents move forming a flake to and fro, it spends differing amounts of time in cooler, warmer, wetter or drier pockets. Each of these microenvironments affects the crystalline formation. Every flake is a unique result of the conditions it encountered on its journey to the ground, much as people reflect the unique life experiences that shape them.

Snow is a great insulator for small plants on the ground, and for little animals like mice and gophers. Because of the many air spaces between snow crystals, snow traps and retains body heat. It also hides creatures from predators and protects them from Colorado's fierce winter winds. Mice construct complex galleries of tunnels under the snow, searching for seeds without the constant fear of a stooping hawk. Gophers burrow under the soil, but in winter they also burrow under the snow pack. When the snow melts, you may find strange tubular cylinders of dirt coiling across the ground. These odd cores show where gophers shoved the excavated dirt from their tunnels during the winter.

Where are the Bears?

Asleep for the winter! Scientists debate whether bears truly hibernate. When animals hibernate, they drop their body's metabolic rate to save energy. They don't eat or drink, they don't defecate or urinate, their body temperature falls drastically, and they slow their heart beat to a fraction of its normal rate. Sleeping bears do these things, but not to the extent of other hibernators. A sleeping bear still burns about 4,000 calories a day – more than you or I. Their body temperature only drops into the 80° range, not to the near freezing temperatures of hibernating mice and ground squirrels. Bears may also wake up and move about on warm days during the winter. But don't expect to see the bears again until March, when they wake up hungry. All winter long they have been surviving off the fat reserves they stored up during their massive fall eating binge.

When the bears wake up, they may come by your house and cause trouble. Problem bears are usually shot. Learn how to keep bears from visiting your home. You'll stay safe, and save a bear's life in the process!

Nature uses only the longest threads to weave her patterns, so each small piece of her fabric reveals the organization of the entire tapestry.
- Richard Feynman

Meet Some of OSMP's Rarest Residents