The East Arapahoe Transportation Plan is a long-range plan that will consider a number of potential transportation improvements within the East Arapahoe corridor, including biking and walking enhancements, Bus Rapid Transit (BRT) and local bus service and automobile travel.

The purpose of the plan is to:

On Wednesday, August 29, 2018, the Boulder City Council voted unanimously to accept the East Arapahoe Transportation Plan. The next phases of the plan include finalizing corridor design and refining cost estimates as the city continues to pursue funding with regional partners and make progress toward conducting shorter-term localized improvements in the corridor.

Based on input from the CWG, TAB and broader community feedback, staff is recommending Alternative 3, which includes:

This alternative is expected to decrease future travel times for all commuters, maintain auto travel time and provide a transit travel time competitive with the automobile. It is also expected to create greater visibility for cyclists and more separation from general traffic, increasing access and comfort for all people walking and bicycling.

Setting the long-range vision (Recommended Alternative) for the East Arapahoe corridor is the first step in a multi-year journey. Implementing the vision and advancing regional mobility improvements along the length of SH 7 between downtown Boulder and I-25/Brighton will be a long-term project for the City of Boulder and key local and regional partners. It will involve continued community outreach and engagement through each step. 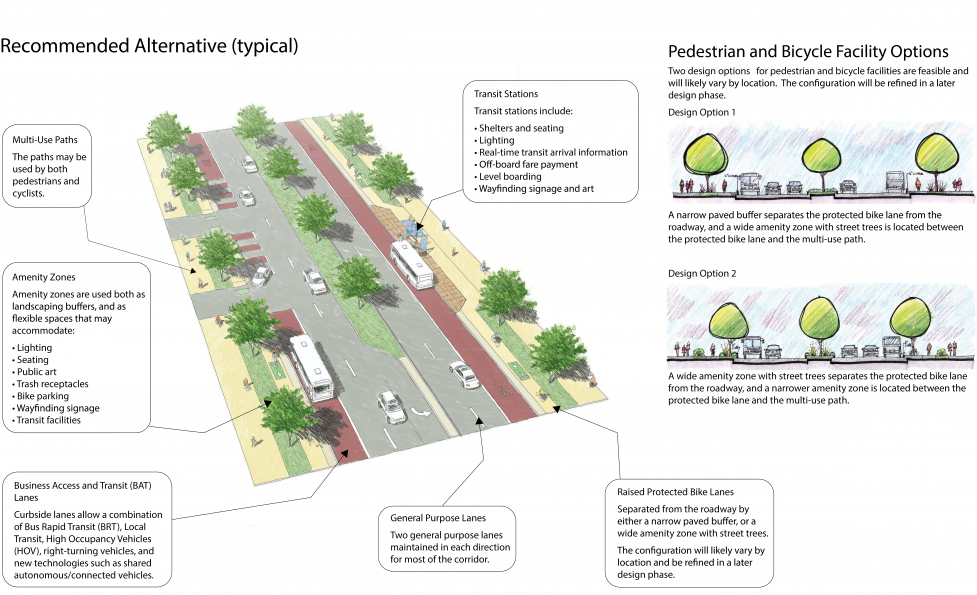 This recommendation is supported by the results of the Evaluation of Alternatives Summary Report.

Appendix B - Purpose and Goals

On Feb. 16, 2018, the CWG released a Statement of Findings that supports the recommended alternative.

The Recommended Alternative would increase pedestrian comfort and safety throughout the corridor, with the largest improvements between approximately Foothills Parkway and Westview Drive. In this stretch of the corridor, a planned 12-foot multi-use path with an adjacent 17 to 18-foot amenity zone and bicycle facility acting as a buffer, as well as lower traffic speeds, would contribute to a higher level of pedestrian comfort than today.

Along the corridor, off-street bicycle facilities would provide a higher level of comfort and safety for people on bicycles than on-street facilities. A tradeoff with shared multi-use paths is the potential for increased conflicts between bicyclists and pedestrians, and between autos and bicycles crossing driveways in the opposite direction as traffic.

With implementation of side-running BRT, high-capacity transit service is forecast to maintain or reduce daily traffic in the corridor by as much as 3,700 vehicles per day. In the recommended alternative, the peak hour LOS, a measure of delay at major intersections, would typically be the same as today, except at Foothills where the PM peak LOS would be degraded. By contrast, in the No Build Alternative, the PM peak hour Level of Service would typically degrade by one to two letter grades, from C to D or E. All the Build Alternatives include roadway design features providing safety benefits to drivers.

The Recommended Alternative, which includes lane repurposing, would reduce through auto capacity at intersections. However, because BRT ridership would reduce auto traffic, a balancing effect on travel time is achieved. In the No Build Alternative, future auto travel times are projected to increase with increasing traffic and congestion. For example, a typical auto trip between US 287 in Lafayette and Boulder Community Health takes approximately 14 minutes today in the AM peak hour and would take an additional 3 minutes in 2040 in the No Build Alternative. With implementation of the Recommended Alternative, this travel time is expected to remain at between 17 and 18 minutes in 2040.

Current ridership on the JUMP is approximately 2,400 daily boardings. With implementation of the Recommended Alternative, ridership is projected to increase to between 7,000 and 10,000 daily boardings. This ridership estimate is between Downtown Boulder and Brighton and include both regional BRT and local bus service in the corridor.

The Recommended Alternative would reduce auto mode share and increase pedestrian, transit and bicycle mode share, moving the city closer to its TMP goal of reducing single occupant vehicle travel to 20 percent of all trips for residents and to 60 percent of work trips for non-residents. As an example, for trips on Arapahoe at 30th Street, 94 percent of all trips are made in autos today. In 2040 with the Recommended Alternative, the auto mode share is reduced to 82 percent, the share of trips made by people walking or biking increases from 2 percent to 6 percent, and transit trips increase from 5 percent to between 10-12 percent of all trips.

For comparison purposes, 2017 conceptual capital cost estimates for multimodal improvements along the approximate five-mile corridor are estimated at approximately $90M. Recognizing that the full corridor improvements along East Arapahoe will most likely be completed in stages over several years, the project team will be developing a phased implementation plan that takes into consideration the different modal elements and potential funding sources.

The city has assembled a community working group to provide input to city staff during the planning process. The working group's feedback will help staff explore future transportation options that serve the varied needs of the community.

Since the February public workshop, the project team has been working to more fully define the ideas proposed by workshop participants. Several transportation improvement alternatives will be refined and evaluated to test their performance and to understand the trade-offs associated with different types of transportation infrastructure.

Alternatives will include each of the following elements:

The project team will conduct a preliminary evaluation of all transportation improvement alternatives and will compare each to future conditions without improvements. The evaluation will consider factors such as:

The project team will present these draft concepts and a preliminary evaluation of the concepts later this summer.