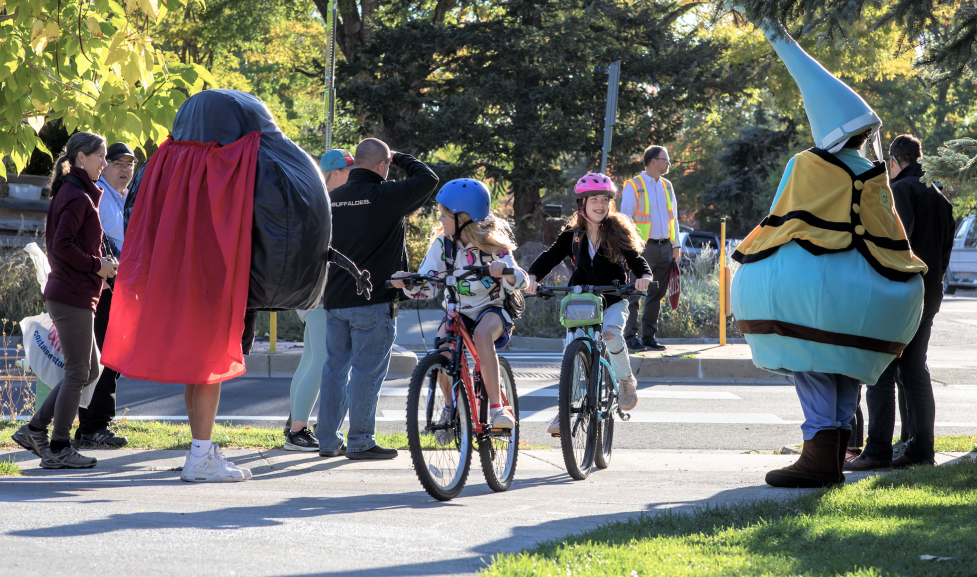 About Safe Routes to School

Since 2005, the Colorado Safe Routes to School program has enabled and encouraged students to walk and bike to school. The program aims to empower our community by addressing barriers that prevent students from walking and biking to school, as well as the health problems related to a sedentary lifestyle. It also aims to help address fuel consumption, traffic and air pollution near schools.

The Colorado Department of Transportation (CDOT) manages the distribution of federal funds through the Colorado Safe Routes to School program. Grants are awarded through a statewide competitive process, in proportion to the geographic distribution of the student population for kindergarten through eighth grade.

With federal funding from the Safe Routes to School program, cities may carry out planning, design and construction projects that improve the ability of students to walk and bike to school. Engineering projects may include:

In partnership with the Boulder Valley School District, the city is in the early stages of applying for a Safe Routes to School grant for the Manhattan Middle School area.

The initial round of community input for the grant application closed on Wednesday, Oct. 26.

We've heard from parents with students at Mesa Elementary and Bear Creek Elementary that Lehigh Street is difficult to cross and that a paved connection is needed through Bear Creek Park. In response, we've secured a combination of Vision Zero innovation funding, Capital Improvements Project funding, and a federal Safe Routes to School grant to make infrastructure changes that will improve safety for everyone walking and biking the corridor.

Since 2001, the Boulder Valley School District (BVSD) has received almost $200,000 for education and outreach projects, including the Safe Schools Boulder project and a $60,000 grant to install improved bicycle parking at 20 schools. A total of 31 schools, including 14 BVSD and four private schools in Boulder, are encouraging more students to walk and bike to school safely as a result of the Safe Routes money.

This Safe Route to School funded project designed and constructed a multi-use path along Hanover Avenue from Broadway to 46th Street. This is expected to improve bicycling and walking for students traveling to four different schools in the area.

This project was funded by the federal Safe Routes to School program and the 2011 City of Boulder Capital Improvement Bond.

Sidewalks along Linden Avenue were identified in the North Boulder Subcommunity Plan and by members of the community during the public outreach effort for the Missing Sidewalk Links Program. In 2009, the City of Boulder was awarded funding through the Colorado Safe Routes to School Program to complete a sidewalk along the north side of Linden Avenue.

The project was a partnership among the city, Boulder Valley School District, Foothills Elementary, Centennial and Casey middle schools, and Shining Mountain Waldorf School. The new sidewalk eliminated a barrier for students and their families by providing a safe walking and cycling route between homes and schools.

The City of Boulder partnered with the Boulder Valley School District (BVSD) to address safety issues associated with bicycling and walking to school. The project, which supports the city's Vision Zero goals, was implemented as a pilot program at three Boulder schools during the 2017/2018 and 2018/2019 school years: University Hill Elementary, Mesa Elementary and Whittier Elementary. However, staff will make the program available to all schools within BVSD.

This project involves outreach activities as well as the identification of areas for potential infrastructure improvements in a 1-mile radius of each of the three pilot program schools. Some of the project activities planned for the 2018-2019 school year included: