YOP strengthens the community through:

The YOP offers Boulder youth opportunities to impact their own lives and those of other youth through peer outreach and representation of youth voice in local government and community projects and initiatives, and funding of individual and community grants.

YOP does this work through the Youth Opportunities Advisory Board (YOAB), which is made up of 16 students from four local public and private high schools.

Past YOAB projects include:

After a two-year hiatus, YOP is reactivating the Youth Opportunities Internship Program in the summer of 2023.

During this six-week paid summer internship, interns will be matched with a city department to gain experience in city government. In addition to supporting their assigned department, interns will take part in career readiness sessions hosted by YOP staff where they will develop and enhance professional skills that will help them succeed in their post and in future endeavors.

The YOP maintains a list of many different local civic engagement programs that middle or high school students can become involved in. Many of them tend to be longer-term commitments than the volunteer opportunities listed in the Youth Volunteer Information booklet, also published by the YOP, which contains a list of local youth volunteer opportunities organized by age.

A subcommittee from the Youth Opportunities Advisory Board (YOAB) in Boulder set out to find the causes and the effects of the achievement gap in our school district.

Hi, I'm Peter. I'm a senior at Boulder high, and I'm a member of the Youth Opportunities advisory board.

I'm Nancy Gonzales, I'm a freshman at Fairview, and I am a member of the Youth Opportunities advisory board.

Because of my family background, I'm at the risk of being at the lower end of the achievement gap. This made me realize something had to be done about the gap. Even though my brother and I are from the same family. Sometimes he struggles more with his academic work. And at times, teachers don't give him or offer him the help he needs. I hope that this video will help teachers help students like my brother be more successful in school.

The following interviews are intended to give students an opportunity to communicate general concerns and strategies to their teachers that could help to close this gap in scholastic achievement.

Being a second language learner, I think, not being not especially because a lot of the Latino kids going home, their parents only speak to them in Spanish.

Because I think people expect more from whites than they do from Latinos and African Americans.

Most Latinos don't get as much attension as the whites maybe because just the teachers see more potential in the whites than the Latinos.

Most Latinos, we like get distracted kinda. Like, not distracted, but we just sometimes don't understand. And like for me, I get a little bit shy to ask.

No one in their family has graduated from high school and/or college. I think that it would be more difficult for them to stay focused in school because maybe that family is not pushing for them to achieve that ultimate goal of getting career after college in high school.

[translated from Spanish] I think as I said in the beginning a lot of Latins have a lof of pressure outside of school and sometimes in school. We don't have the economic means that some white students do, to have everything we need for studying or maybe have a computer or to have the different things you need to be able to get good grades in school. That's why sometimes we have to work or may have family problems and there's too much stress from the outside to be able to study.

Seeing my parents how much they have to work from not graduating high school or college seeing how hard they work to raise me and my other three sisters. Makes it really important because I know that I want a better future for myself and not have to want to work like have to work so much.

So I guess I guess sports really helped because to put in order to play in a game you had to have good grade. So that will motivate me to do well in school.
I want to do better in school because I want to have a good career and have a better job than my parents have. So so they could like so they could look at me and be part of me.

Well, she was my, I was an avid, she was an avid teacher, and she helped me like with a lot of the college stuff. And if I ever had like, personal problems, she was one of the persons that could go to and talk to and just let everything out.

They are there to also be like your friend, also. So it's really cool when a teacher comes up to you and like likes to have conversations with you.

I don't know, like, he didn't judge on first impressions or physical appearance or anything of that sort. So I mean, he definitely took time to learn the real person instead of just, perhaps maybe, I don't know, their background, or just assuming he took time to help that help me as a student, they offer help outside of the classroom, that definitely helps say, Oh, you can come by during tap or an OFF period or something like that, or lunch, that definitely helps out.

So I've had a couple of times where they hold me back. And just to help me like this for those last couple of minutes and to show me those, like, what that was, and if they know like, I really didn't understand that they hold me back to explain it one more time.

He basically walks you through it also too, so that you would understand it more. Let's say I'm gonna say better. But um, and he'll like take you through, like, let's say, you're also missing like homework assignments, or you didn't get it, he'll say, here's what you have to do, you have to do it this way. And I'll give you the facts. So you are able to complete it.

Sometimes in class, if you're writing something or typing something, if you know, I'm like a half a page down, teacher sees me. It's like, oh, he's doing good. But as the teacher, the student next to me only has like one line down, the teacher will go up to him and ask what's wrong, like, Do you need help or...

Advice I'd give teachers would be to go into more depth of the material. Because sometimes one teacher will be really fast and will teach one thing after another after another, but I think would help more is if they go they teach one thing, go into detail, make sure everybody knows it, then they go on to the next thing. Even if it's a little bit slower, I still recommend that.

Probably check in with the students first to see how they're doing.

Well, one thing would be to like if you're teacher that like sometimes talks fast, to slow down a little and like, be more open for kids to ask you questions?

Well, the thing I realized first about the achievement gap was that in order to cinch it, you have to be paying more attention to the lower, lower achieving kids than you do to the higher achieving kids. And I feel like there's definitely a necessity to pay attention to higher achieving kids. But there's even more of a necessity to pay attention to kids that need more help than usual. And I feel that just off the top of my head, I can list more programs and ways in which a kid that is doing well in school can receive help than a kid that isn't doing as well in school can receive help.

I think it's both the teachers and the students responsibility. Because if a teacher notices a student isn't doing as well as they could be doing, they could go and talk to them and ask if they need help on anything. And also, like I felt discouraged by a teacher when you tried to talk to them about something you need help with. And they say they don't have the time or they just ignore you.

Well, I guess one thing that a lot of the students talked about when we interviewed them was the fact that if a teacher checks in with them, just from time to time in a class, it can really help them succeed. And then also just the fact that when the student feels is probably not as confident in English, they can often feel like shy or unable to feel like they can ask the teacher for more advice under instruction on that certain area.

What I wanted to accomplish making this video was to let teachers know, like, what kinds of things that they're doing to help a student and to like keep doing those things to get them to succeed in school.

Well, I guess what I want to accomplish from this video is to allow students to have a voice into well, the education practices of teachers. So I think a lot of times teachers have workshops and stuff in which they learn how to help students, which is definitely beneficial. But this allows students to say what works, what doesn't work in a classroom, and what really helps them to succeed.

The Outstanding Youth Volunteer Awards (OYVA) events have been on hold since 2020. We anticipate reinstating these events in spring 2023. 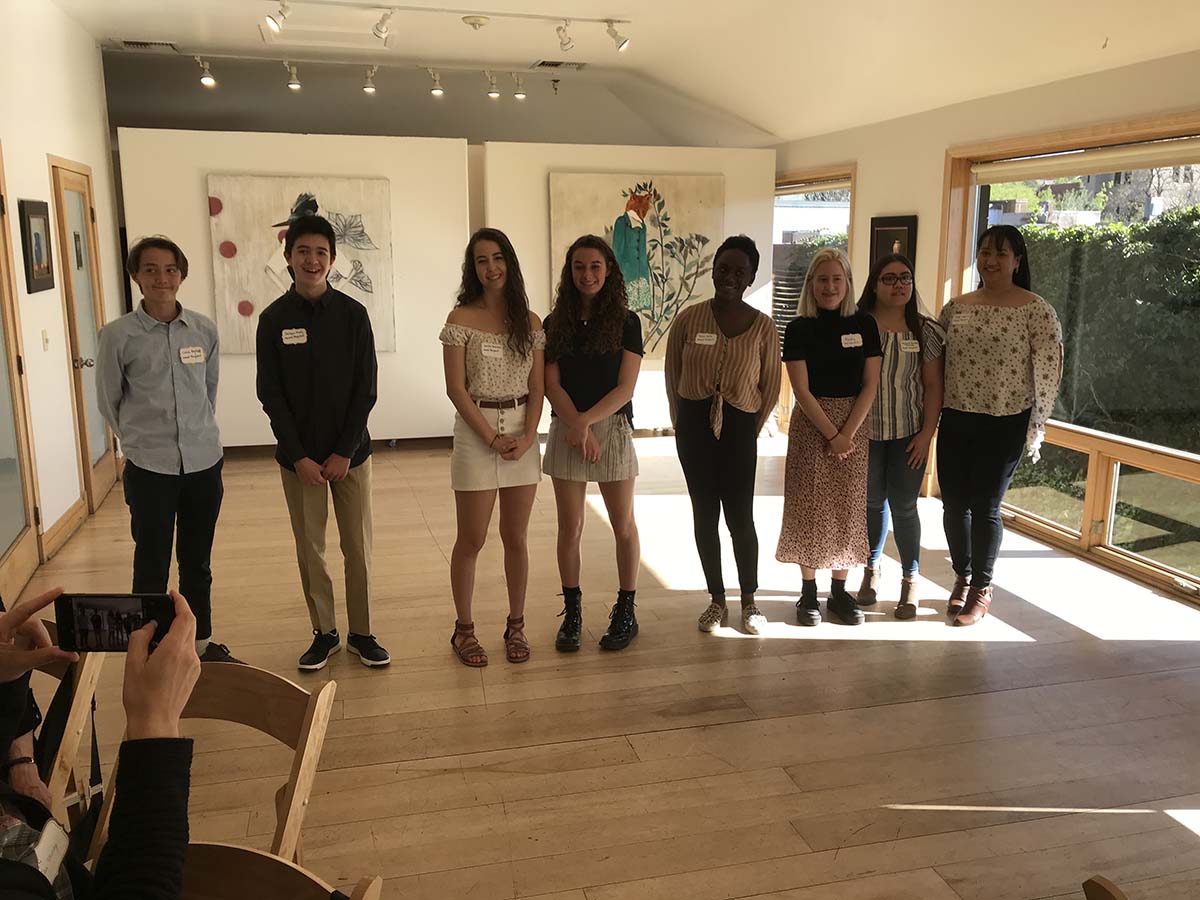 The City of Boulder's Youth Opportunities Advisory Board presented the 2019 Outstanding Youth Volunteer Awards at a breakfast banquet on May 14 at the Rembrandt Yard. All of the award winners provided outstanding volunteer service to their neighborhoods, communities, schools, and/or agencies in Boulder.