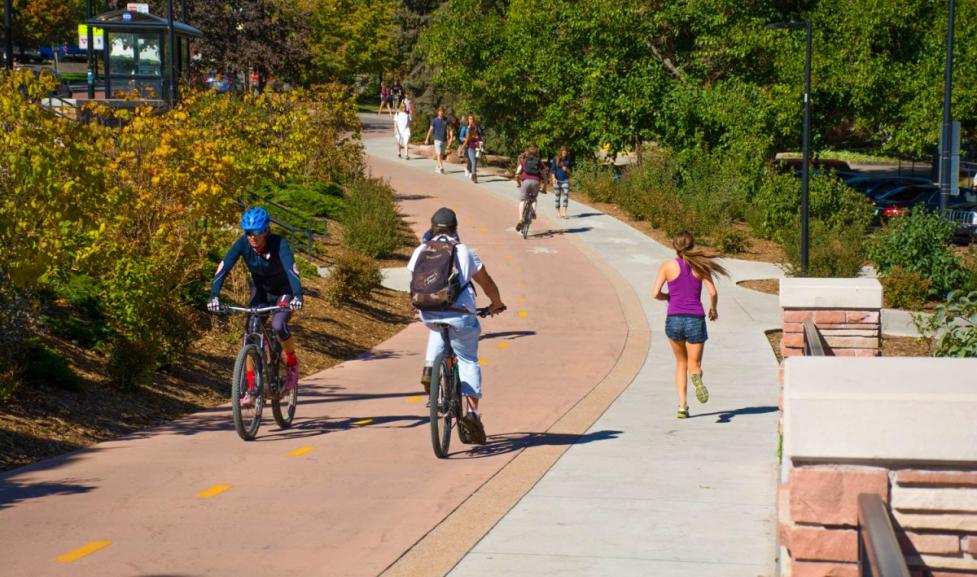 Get Around by Bike

Biking for your commute

All RTD buses and Boulder’s local HOP bus are equipped with bike racks on the front. Learn more about RTD’s Bike-N-Ride.

Bikes and e-bikes can be ridden on all streets, in bike lanes, on multi-use paths and on sidewalks outside dismount zones (please note e-bikes may not be used on designated OSMP trails).

Riding bikes on the sidewalk is prohibited downtown on and around the Pearl Street Mall and in the University Hill commercial area.

These are provided throughout Boulder, and make it easier and more secure to park your bike. Park your bicycle in a designated bike rack whenever possible. All official Open Space and Mountain Parks Trailheads have bicycle racks.

Available for free inside the following garages:

Available at these RTD facilities:

Six-month renewable contracts are available from RTD for $20

Register your bike for $10 with the University of Colorado Police Department (you don’t have to be a student).

If your bike is stolen

Get the BCycle app

Find a bike near you

There are more than 40 bike share stations conveniently located around the city.

Take any bike out for a short trip.

Drop off the bike to any station.

Until your pass expires.

Electric Assisted Bicycle (e-bike) use is permitted on certain multi-use paths within the City of Boulder.

Bicycling is often portrayed as a symbol of the healthy and active community and lifestyle found in Boulder. Boulder already has high bicycle use compared to most U.S. communities, but with growing public health concerns about obesity and air quality, increased bicycling remains one of the most effective ways to travel while achieving personal health and air quality benefits. With an average trip length of about four miles, many of the trips made by Boulder residents could be accomplished by bike.

The bicycle element is based on developing a continuous bicycle network of cross-town corridors allowing for safe and convenient bicycle travel throughout the community. While these corridors may be composed of a variety of facility types, continuous corridors avoid the missing links that disrupt bicycle travel and put bicyclists in unexpected, difficult, and potentially dangerous situations. The bicycle element also recognizes that bicycle users range from the experienced commuter who is comfortable in traffic to children who cannot safely use a busy street. Consequently, a system of off-street multi-use paths is included as an option to the street system.

The long range bicycle network for the City of Boulder is comprehensive and will provide both on- and off-street connections throughout the city. With the completion of the bicycle element, an additional 92 miles of bicycle lanes, routes, and shoulders will be added. In addition, enhanced crossings, overpasses and underpasses will be added to the bicycle network. These facilities will provide safe connections and the opportunity for bike travel throughout the city for all levels of riders.